The four seater train compartment was filled with boxes and a man and a woman. The man was frowning and obsessively hanging on to the boxes as the train made its bone-shaking journey. At each jolt and rattle he seemed to be trying to hang on to all the boxes at once. The woman gazed out the window at the rainy landscape with a half smile on her face.

“Well, it’s good to be going home,” said Sir John, “even if it is in this terrible train again.”

“Yes,” said Marie. “I’m looking forward to getting back. Did you find out about Clackprattle and Pook? Did the constabulary find them.”

“No,” said Sir John. “By the time I had explained and then convinced everyone what had happened Pook and Clackprattle had long gone. They had been renting some rather fine rooms in the Britannia Hotel. They were empty when we got there.”

“Well, Clackprattle’s a devious swine for certain, but I don’t think we need to worry about an oily little character like Pook,” said Sir John. “I imagine he’s perfectly harmless without his master in tow.”

They fell silent for a bit, then Sir John said, “How did it go with the Copperwaites?”

“Oh,” said Marie, “I nearly forgot. When I got back of course she had awakened and there was a lot of activity in the house. I tried to speak to the father, but he ignored me saying our services were no longer required as his daughter was better.”

“Oh dear,” said Sir John. “So they didn’t realise we were responsible for that?”

“Well, I spoke to the maid, you know the one we…” started Marie.

“Well, she let me speak to the daughter, Lillian for a few minutes. I explained what had happened, how she had been mesmerised by Pook … and, er, Clackprattle. I explained what they had been trying to do. She seemed to understand.”

“That’s good, I suppose,” said Sir John, looking a little glum. “Still, I was rather hoping to get paid this time.”

“Well, as I was packing up our room the maid came and gave me this envelope. That is what I forgot.”

Marie took a letter out from her handbag and passed it to Sir John.

“Dear Sir John and Mrs Jennings,” he read, “Thank you so much for rescuing me from the clutches of that evil monster, Clackprattle and his vile servant, Pook. I am grateful beyond measure and want to demonstrate that gratitude to you. I feel that what you have done for me is so great, that no amount of money could ever match it. So instead I have chosen to give you something priceless. I enclose a precious piece of art that I have made to recognise what you have done.”

“Well, perhaps this art will be valuable?” said Sir John.

In with the letter was another piece of paper. The Jennings both looked at it. 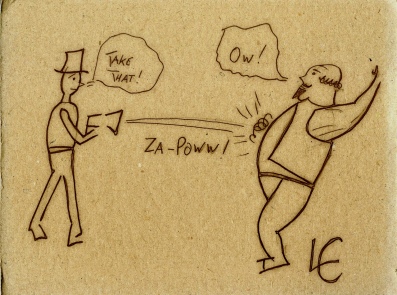 One thought on “The Mancunian Mesmerist: Epilogue”