“In we come everybody, in we come Sir John, Mrs Jennings, Morag,” said Miss Henderson at the door of the artists church.

“Mon Dieu!” said Sabine, jumping up from the big table. “What happened?”

“Let’s get these lot in,” said Miss Henderson, “and I can try to explain.”

She brought the trio in, arms around the Jennings and one hand on the lead of Morag. Sabine helped her get the humans into chairs and the dog onto a comfortable rug. All three had a vacant look in their eyes and their lips twitched occasionally. Miss Henderson sat down at the table.

“I think, under the circumstances, a nice cup of tea might be in order,” she said. “I’ll make one in just a minute.”

“Have you been crying?” said Sabine. “Your eyes… never mind tea I think this calls for brandy.”

Sabine disappeared for a moment then returned with an ornate bottle and two glasses.

“It is extra old, from Cognac,” she said as she poured two glasses.

“Oh well, I suppose it will do anyway,” said Miss Henderson. She took the glass and took a big gulp of the drink.

“Under the circumstances,” agreed Miss Henderson, and drank the rest of the glass.

“So what happened?” said Sabine, refilling the drink.

“Well we went to see the Walrus and we had the test,” she said. “I was last, but even though that was the case I don’t know what was said to the others. It was like he spoke to them, but you couldn’t hear, like his words were underwater. But after he spoke, they were in this state, all gin and tonic as Morag says.”

“He said… well he said,” started Sabine then took another big gulp of the brandy. “There’s this gentleman… and some difficulty.”

“With gentlemen there is always some difficulty,” Sabine said. “They are naturally difficult creatures.”

Miss Henderson looked up at Sabine and nodded slowly. Sabine raised her glass and smiled and the two women clinked glasses together. They both drank.

“So, I suppose we have to go back and try again,” said Sabine sighing. “Maybe we can work out what’s needed to pass the test next time.”

“Actually,” said Miss Henderson. “I’m not sure we do.”

She pulled her hand out from under the table, still clenched in a fist. She opened her whitened fingers one by one to reveal a small piece of metal. 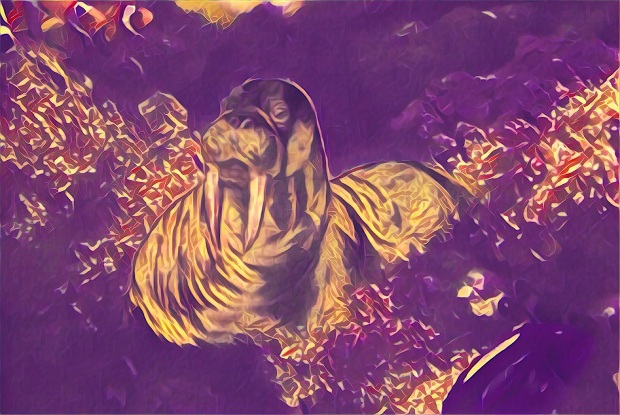 “Are you ready?” said the Walrus.

“I believe so,” said Sir John as a small fish passed in front of his face.

“Then we’ll begin,” said the Walrus.

She doesn’t need you, John. She hasn’t needed you for a while now. She’s more powerful than you. She had found out more with her wits than you have with your clever toys. Even as we speak she learns more and more about who she is and what she can do. How long before she leaves? How long before she finds people, creatures, beings that she does need?

And what will you do then? Lick your wounds and fly home? Build more pointless machines? Look for phantasms that you’ll never find? For if she doesn’t need you, then no one will.

“Mon cher?” said Maire, looking at her husband, her brow furrowed. “Mon cher, are you alright? What was said, mon cher? I didn’t hear.”

Why do you think she’s dead, Marie? You never had proof except from an aunt who lied to you. How do you know she didn’t lie about your mother? Or is it easier for you to believe she is dead? After all, running away is what you do, isn’t it?…is what you always did. Is it easier to run from the possibility of your mother than to search for her? Is it easier to believe there is no family at all anywhere? That you, with all your powers, couldn’t find a family if they did exist? Have you really come to Paris to find who you are, or are you just running again from who you’ve become?

“They’re catatonic,” hissed Morag, “What did it say to them to do that?”

And why do you think he’s dead, Morag? Your father stuck by you for centuries, made sure you were safe. He dragged your soul from death, even in the wrong body. He tortured himself every day for that mistake. He worked tirelessly to create the stone to liberate you both or keep you alive until he could. And then when he vanished, magically, you forgot about him. You didn’t try to see if anything had happened, not one operation, not one conjuration to see if he was alive. Was it such a relief for him to be gone, after all he did, that you turned your tail and walked away?

He can never marry you, Felicity. No matter how much he loves you or you love him, you can never be man and wife. How could you be? Your family are criminals and he is a policeman, a detective even. How would that work? What would the wedding be like? At least there would be no need for introductions as the left aisle has likely been arrested by the right. If you were to marry, what would happen to you both? He would be rejected by your family, suspected at work. He’d have to leave the job he loves and he would come to resent you for that. And you, how would you feel about your family, or them about you? You could be ostracised, you could be abandoned. It is impossible to see how you could be together.

A tear slowly trickled down Miss Henderson’s cheek and she looked down.

“That…” she said, “that would be a very sad thing, because in truth, I like him very, very much and I think he likes me and I think together, just us, we could be very happy. But if what you say were true… if that were true…”

She looked up at the Walrus and stuck her trembling chin out.

“There are plenty more fish in the sea.” she said.

The Walrus smiled and the aquarium vanished. Miss Henderson stood in the gloom with her three companions. She wiped the tear with a clenched fist.