So a most pleasant “Steam Driven Quiz Night” at renowned Brighton hostelry The Yellow Book proved to be more than a little educational. We learnt about this chap:

A Mr William Friese-Greene, latterly of these parts who was an inventor of early cinematographic devices. He was a little tardy in his inventions, but had a supreme talent at naming them. His early creation was a Biophantascope and later he made a chronophotographic camera.

A profilic inventor and a most excellent nomenclaturist, Mr Friese-Greene, we salute you.

“Why don’t you try to sleep,” said Marie to Sir John, as they both sat in the four poster bed.

“I can sleep perfectly well if I want to,” replied Sir John staring wide eyed into the room. “I just simply want to make sure that you are safe.”

He went to pat her shoulders and tapped her pillow absently.

“I don’t think we ‘ave anything to fear here, mon cher,” said Marie.

“Well I have this just in case,” said Sir John. “It’s a daguerreographic device. I can capture the image of anything that appears, as evidence. It has this lightning flash which will render the room as bright as day if necessary.” He indicated vaguely to his bedside table as he stared intently into the room.

“Well, if we need to watch for something, why don’t we take it in turns,” said Marie. “Then at least we get some sleep.”

Several hours later, the candle by the bed had burnt down and the room was plunged into darkness. Marie was sleeping curled up in the bed and Sir John was sleeping sitting up. A thin rivulet of saliva ran down his chin and he was snoring gently.  On the ceiling of the room, an area seemed to light up and drift down. It hovered at the foot of the bed and expanded, getting brighter and finding form. The shape that had once been dust, and before that a young man, rested at the end of the bed. Sir John started to stir as the light grew in intensity. His eyes began to move and he opened them up.

“Good God!” he exclaimed and reached for the bedside table. The noise woke up Marie just in time to watch her husband pick up the the cumbersome device and press a button. There was an explosion of light.

“I’m blind, I’m blind,” said Sir John, who dropped the device and waved his arms around.

“Shh, mon cher, it’s just the lightning flash,” said Marie holding her husband. “It will pass.” She looked at the apparition at the foot of the bed, tilting her head quizzically.

The apparition, still with a tear on its cheek, raised an arm to point to its right. Marie nodded at it, and it faded away. Sir John had calmed down by then and looked around.

“What the blazes was that?” he said.

“There was nothing, it was just a dream perhaps,” said Marie.

“The daguerreograph!” said Sir John. “We may see something there.”

They looked into the box and saw a close up picture of Sir John’s startled face. 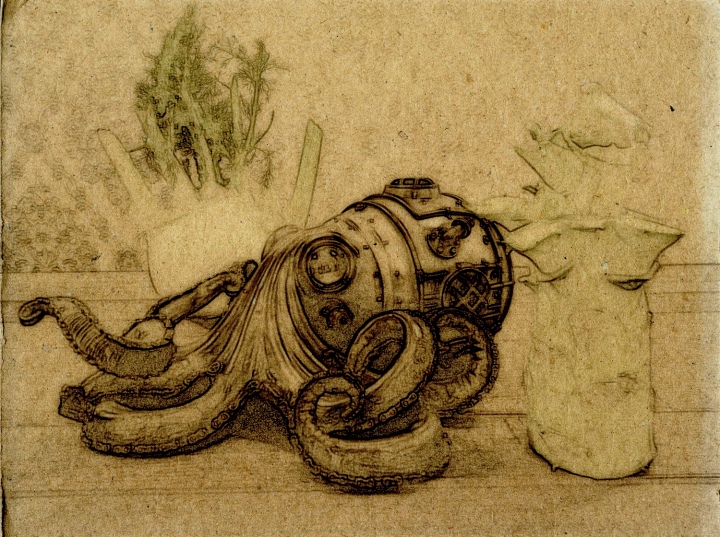 Here is an octopus with some vegetation to delight and amuse you.

Sir John and Marie sat in the large lobby of the mansion with the bags they had brought from London. The Jennings’ instruments and devices were in four large suitcases and their clothes and personal effects were in one. An art gallery worth of portraits from all ages glared down at them from the dark wooden walls and a large stuffed moose regarded them suspiciously.

“I’ll send for the carriage presently,” said the ageing butler.

“Thank you, er Smyth, whichever tavern in the village you recommend,” said Sir John, and looked around the room. “Impressive selection of artwork. Who’s that imperious looking chap on the end.”

“That’s the first Lord Howarth, who built the original Grimley Hall. It was somewhat smaller than the current incarnation.”

Marie looked around the room, trying to find a likeness of the apparition she had seen. The pictures were mostly of men, and mostly older men. Only one seemed to be more youthful, but he didn’t look like the boy at all.

“Oo is this younger man,” said Marie. “All the others seem much older.”

“That is Lord Charles Howarth, who died in… uncertain circumstances… in the northern wing,” said Smyth, looking meaningfully at Sir John.

“In the room we are currently…” started Sir John, finishing by waving his hand.

“The very same, sir. He was found dead in that room after a night of cards with friends. He had seemingly lost a large sum of money. Nothing was proven, so no charges were brought. I believe the local priest was trying to exorcise his spirit when he was forced to leave by some unpleasantness.” 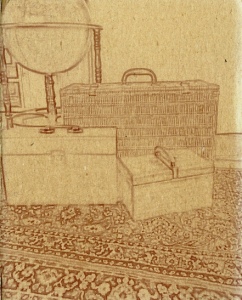 “I see,” said Sir John. “Oh, and what of this chap here – he looks a rum sort, there must a few stories about him.”

“That,” announced Lady Howarth, appearing from the top of the stairs, “is my father. He built four factories, increased the family fortune by tenfold and extended the house to its current form. He was a true Howarth, full of vigour and strength. And certainly not rum. Why are you leaving Jennings, your job is far from complete.”

“Yes, indeed,” said Sir John, “but we have set up specialist instrumentation in the room and will return in the morning to get the results. I expect we will have some answers then.”

“There is no need to leave, we have room for you here. Smyth can arrange everything,” replied Lady Howarth.

“Stay?” said Sir John, with a slight waver in his voice. “Here?”

“Yes, I see no problem with that. Put them in the north wing, Smyth, there is a vacant room there as I recall,” said Lady Howarth.

“The bedroom directly below the haunted room?” said Smyth. “The room that once was Lord Charles’ bedroom?”

“Well, Lady Howarth,” said Sir John, forcing a smile, “we are most grateful for your hospitality.”

“And this is the room where the most activity has occurred,” said the middle-aged Lady Howarth as she led Sir John and Marie into a large empty room on the second floor of the mansion. “The furniture was removed after…” she continued when Sir John interrupted her.

“No, Lady Howarth, I insist you tell me no more. Objectivity is the key to good science. If we hear more we may be somehow prejudiced.”

Lady Howarth looked at Sir John and made a face like she was chewing lemons. “As you wish,” she said. Marie walked by the fireplace and ran a finger over the dusty mantelpiece.

“No one ‘as cleaned here for a while,” she said and knelt down by the fireplace.

“I went there once,” said Lady Howarth and put a handkerchief over her mouth and nose.

“First, I will examine the room using these Ectoscopic Glasses. These allow me to see the traces and the nature of any spectral apparitions.” Sir John donned a bulky pair of brass and chrome goggles. He tipped forward from the weight at first, then steadied himself and moved around the room. Lady Howarth watched with a bemused look on her face and, as she was doing so, Marie put her hand in the fireplace and scooped up some ashes.

“I think I detect something,” said Sir John pacing around the room. Marie started walking around edge of the room and when no-one was looking she dropped a little ash in each corner.

“Yes!” proclaimed Sir John. “A definite trace left behind. Something very old and potentially evil… there!” He pointed in front of himself and pulled off the goggles to discover he was pointing at Lady Howarth. Her lips were very thin.

“Perhaps if you wait outside,” he said. “I think maybe your presence is affecting the aura.”

She left wordlessly and closed the door with a tut.

“I think maybe this isn’t the ideal device,” Sir John said to Marie. “I’m going to get the Thaumograph. If I set it running overnight we can capture any supernatural activity.”

He left Marie and she moved to the middle of the room. She put her palm flat in front of her face and blew the last few ashes into the air.

The sun was already lighting the dust in the room, stirred up by the movement of the three people. But now the dust seemed to congeal in front of Marie. At first it looked like a funnel shape, as if the wind had caught it. But then it grew more form and the image of a teenaged boy formed. A dust tear ran down his face.

“Tell me,” said Marie gently. Just then, there was a crash as Sir John came through the door, holding a contraption of metal and black material on a tall tripod. The dust image dissipated in front of Marie at the sound of the noise. Sir John dragged the object into the centre of the room.

“Now,” he said triumphantly. “Now we shall get answers.”