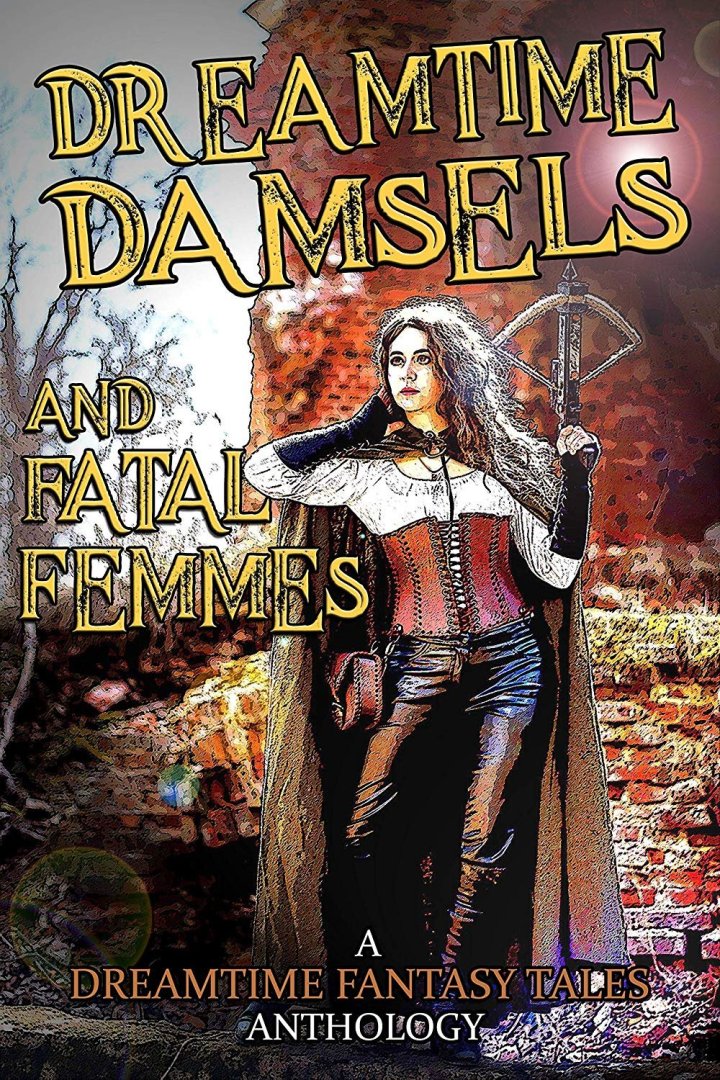 So finally, Dear Reader, we can explain all the Dreamtime Damsels malarkey. For here is the precious tome itself…

Including a story featuring the marvellous Miss Henderson as well as many stories from our friends, available Sep 25 – we heartily, excitedly and proudly recommend it. 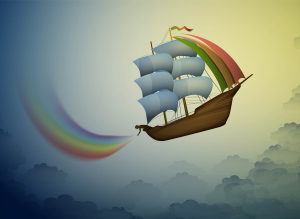 Good Morning Ladies and Gentlemen, welcome to Max and Collin’s rambunctiously raucous and chi-chi to the core parlour located high above it all on board our beautiful rainbow-sailed ship, The Harlequin Ladybird. Yes that’s right we have escaped our dank cellar and our evil landlord (if you want to know how you will have to read our #RainbowSnippets posts on Saturdays and all will be revealed). So we are now heading the revolution in Ire from the skies – which turns out to be much safer and more fun than heading it from the ground! But never fear, we still have time to stop for elevenses!

Our tentacles are all of a quiver this morning and our china cups are chattering because this morning we are taking part in the Dreamtime Damsels blog tour and we are honoured to have one of the contributors, Nav Logan, as our guest for…

Courtesy of Mary Woldering, some interviews from Dreamtime Damsels (of which we will explain more later) along with a recipe for lasagna and a history lesson on undergarments!

“So Bisset, we have kept our end of the bargain,” said Clackprattle, throwing down the list of names on the large table. “All your terrible foes are dead.”

“Indeed,” said Bisset. “The fraternity is most grateful for your service. We will be free from the interference that scrutiny can bring. But, I have to say, you have not perhaps kept all of you bargain? There is, shall we say, a little lacking somewhere?”

“We did more than your band of merry men could do. We have one piece of the key, if that trivial matter is what you are referring to,” he said.

“The very same,” said Bisset. “And whilst we understand the difficulty of the undertaking, we cannot help but feel a little… disappointment.”

“We’ve barely begun,” said Clackprattle, waving his hand. “Wait and see. Now that we aren’t distracted by your petty requests we’ll have the key in a week.”

“I’m afraid you are mistaken,” said Bisset. “We rather feel you are in fact, at an end.”

“Why you…” roared Clackprattle and pulled off the glove to reveal his corrupted hand. He started to lurch round the table to Bisset.

Pook nodded once and turned to face Clackprattle. Suddenly the fat man’s hand turned back towards his face.

“What is this?” he roared. “What is happening?”

“But,” whined Clackprattle as his own hand locked around his throat and the terrible green depravity spread to his skin. “Pook, man, we have been companions.”

“Mr Clackprattle,” said Pook. “And please, allow me to call you mister. We have indeed been, shall we say, travelling companions. But I am afraid we have had different destinations for a while now.”

Clackprattle slumped onto the ground, his face green and aging, his hair falling, his eyes staring in confusion at Pook.

“And I am afraid that this is your final destination,” said Pook.

He stood over his former master as the last uttered a final wheezy plea before collapsing dead on the floor. A moment passed.

“Very elegant,” said Bisset. “And now that, as they say, the gloves are off, perhaps the masks can fall too?”

“Indeed,” said Pook, still staring down at the corpse. “For example, I think I can infer that you are not merely the servant but indeed the very master of this fraternity. Am I right?”

“Just so,” Bisset said. “And in return I may assume that your master, the one who gives you these remarkable powers, is not the ludicrous corpse slumped on the floor?”

“Indeed that is the case,” said Pook. “But there the mask must remain a little longer. It does not behoove me at this time to reveal that snippet of information.”

“A shame,” said Bisset. “I had hoped we might work further. The brotherhood is still most keen to capture the weapon. It is a matter of honour now.”

“Well then I can give a mixed report to you sir, and an offer nonetheless,” said Pook. “It seems that our little stone bug has left Paris and headed south.”

“Another failed ploy,” said Bisset, standing now and gathering his things. “Such a pity.”

“It means either Mme Jennings has left Paris, which would be an interesting development, or the bug has been detected and tampered with,” said Pook. “We will only know for sure if we investigate the situation where the Jennings are staying. As you have mentioned, your members are too public to carry out this kind of task. Which leaves you at an impasse.”

“But due to the ah, unfortunate and untimely demise of Mr Clackprattle, I am, as of this very minute, the head of a large secret society of fine, well educated men and women, I need only click my fingers and a team of anonymous investigators from London can appear,” Pook said, before looking up at Bisset.

“That would be… most useful,” said Bisset.

Pook clicked his fingers and there was a knock at the door.

Bisset looked at the door then at Pook.

“I knew this day was coming last week,” Pook said. “I told them to arrive here right now.”

You can find Mr Clackprattle’s glove here and the floral background here.

via Dreamtime Damsels Blog Tour: Soup Of The Day: With Nav Logan 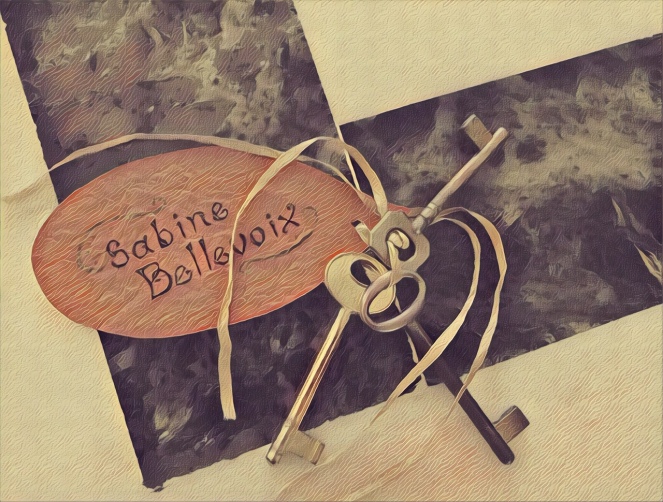 The corpse of Emile lay withered on the floor of his apartment. The note that Pook had read was dropped by his face and the room was silent. His dead hands clutched at empty air.  Dust motes circled aimlessly as Emile’s blank eyes stared at nothing, his face frozen in confusion.

There was a knock at the door.

There was a short pause and a sigh from outside. Then there was another knock.

“I know you must be there,” said Sabine. “You never get up til lunch. Open the door.”

There was another short pause and the doorknob rattled.

“I thought we had made a rapprochement,” said Sabine. “Is there something new that has happened?”

She rattled the door handle again.

“Or someone new that has happened? Are you… are you seeing someone else now, is that it?” said Sabine. “Don’t make me look for these blasted keys, you know my bag is a mess.”

There were sounds of rummaging from outside the door followed by a sound like a sack dropping and a loud “Merde!”. More rummaging followed before the distinctive rattle of keys was heard.

“Found them. I hope your new hussy isn’t there,” said Sabine. “Because I’m opening the door.”

There was the sound of a key being pushed into the lock, more cursing and the clatter of dropped keys which provoked another “Merde!”.  Finally the door was unlocked and swung open.

“Is she pretty?” said Sabine marching into the room, looking furious.

She looked around, slightly puzzled then looked down to see the corpse at her feet. The keys dropped from her hands and she stared down at the body. For some time she stood motionless looking down and then she made an unearthly, low keening sound. She fell to her knees and her hand went over her mouth. She gasped for air like she was drowning and her eyes looked up for a moment before staring back down at the remains of Emile.

Her hands left her face and held the frail head of Emile, she stroked the remaining hair.

She keeled over and held his head to her chest. Lying on her side and clutching Emile to her she made a guttural sound in her throat. She then emitted a series of rhythmic sobs.

Sabine’s eyes closed and she moved no more as tears trickled down her face. After a little while like this, she disappeared.