Just a few hours later Sir John, Marie and Emile found themselves arriving into the same downtrodden alley that their adversaries had just been.

“Are you sure it’s here?” said Sir John, entering the alley first. “This place is filled with…”

“Merde!” said Emile, entering next and clamping a handkerchief to his nose.

“I was going to say filth actually,” said Sir John. “But you’re not inaccurate.”

“It’s here,” said Marie, bringing up the rear and staring at a stone in her hand. “I could tell even if this little one wasn’t saying so.”

“Where? Is it one of these doors?” said Sir John, looking about in confusion.

“That one,” said Marie, pointing to the dilapidated wooden door with a grate, covered in feathers. “That door there.”

Sir John went to speak. He saw the expression on his wife’s face and apparently had a rethink. He knocked on the filthy door. As before, nothing happened for a moment. Sir John turned away when the panel slid back and the same hook nosed face stared out, head tilting in all directions. Finally its beady eye settled on Sir John.

The panel slid shut and presently the door opened. A tall woman with hair spiked up into a high coiffured arrangement came out. She was wearing colourful clothes and bold makeup. She looked at the three in the alleyway and nodded.

“Yes,” said Sir John. “The challenge for the key.”

The woman strode over and leaned into Sir John’s face. Her head bobbed from side to side and she seemed to be thinking. Eventually she leaned back.

“I beg your pardon?” said Sir John, as another person came out of the door. It was the rotund, red chested man from before, with the peculiarly thin legs.

“Another one come for the challenge?” he said.

He indicated the woman.

“Polly want a cracker,” she said.

“Which one?” said the rotund man.

“Next Tuesday,” said the Oisienne. “Sunset we gather.”

“He said another one,” said Marie. “That means Clackprattle and Pook.”

Clackprattle, Pook and Bisset stood in the dingy alleyway in front of the door. Bisset had a handkerchief over his nose and Clackprattle was sniffing profusely.

“Are you sure this rat infested pox hole is the place?” said Clackprattle.

“Hey!” said someone from a window overhead. “Watch your tongue, fatso.”

“Most assuredly,” said Bisset, muffled by the cloth. It almost sounded like he was stifling a laugh.

“Well then Pook,” said Clackprattle, staring sourly at the upstairs window. “Have at.”

Pook stepped in front of a old wooden door, noticing the feathers and guano stuck to it. He rapped lightly, doing his best to avoid contact. For a moment nothing happened and Pook went to rap again when a wooden panel slid back at head height.

A slender man’s head with a long nose appeared at the panel. The man’s head tilted side to side and back to front, never actually straight up. Finally the right side of the face was pressed against the hole and the man’s eye rolled around.

“What?” squawked the man.

“We are most delighted to make your acquaintance,” said Pook brightly. “We are assuming we are addressing a member of the Oisienne?”

The head bobbed up and down vigorously in lieu of an answer.

“That is indeed wonderful news,” said Pook. “We are, you see, here in order to undertake the challenge we believe it behooves you to administer to those who request it. I refer of course, to the challenge for the famed key of the weapon of Paris.”

The man’s head bobbed back and forth a little more.

“Wait,” shrieked the man and the panel closed.

“I do hope we do not have to remain here too long,” said Bisset.

“The difference between you aristos and me is that you’ve never seen an ounce of muck in your life,” he said jeeringly. “You don’t know what to make of it.”

He stepped back into some horse ordure.

“Bugger!” he said, and Bisset turned away a moment holding his cloth ever tighter to his face.

The door started to open then, and all three men watched it. A short man of an unusual style came out. His legs were exceedingly thin and were dressed in hose, whereas his torso was large and his bulging stomach, extremely bloated, poked out from his red waistcoat. He had a round face with a small pinched nose. Holding his hands behind his back he walked around them, nodding as he did.

He made a tutting sound and another strange gentlemen emerged, This one was unusually wide and had no neck. His eyes were round and the colour of amber. He waddled out into the alley as well.

“You come for the challenge?” said the first man. His voice was surprisingly thin and high.

“To wit?” asked the second.

“Indeed we most assuredly do,” said Pook.

“Which one?” said the first Oisienne, looking rapidly between the trio.

“That will be myself,” said Pook. “Mr Ernest Pook of Lancashire and latterly London.”

“Hmm,” said the red-chested Oisienne. “Next Tuesday. Sunset we gather.”

The two strange creatures returned into the building and the door slammed shut.

“Tuesday it is!” said Clackprattle in triumph before kicking out at a small creature scurrying around his feet. The creature seemed to catch Pook’s eye who watched it then smiled. 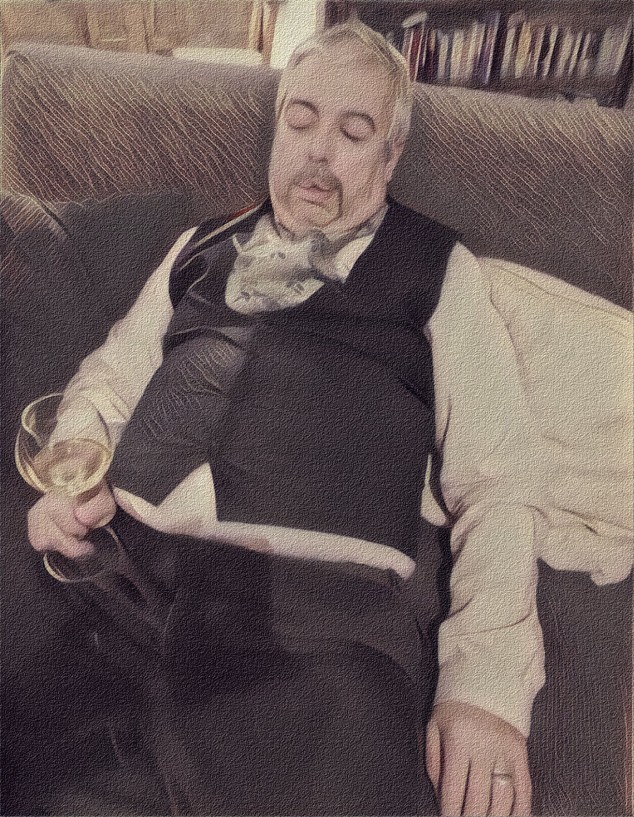 There was a loud hammering at the door of the dingy lodgings.

“Mr Michael, Mr Michael,” cried the Landlady, Mrs Grobblewit. “Oh it’s no use constable, it’s been like this for two months now and the smell is sometthing awful. Actually, to be fair the smell was always something awful, but he owes me two months rent, and me once again in the family way.”
“Never fear, madam,” said a stout man’s voice. “We’ll have this sorted in no time. Constable, with me.”
There then followed some loud thumps and finally the door crashed in. Two police officers with enormous mustaches looked into the room, whilst a middle aged lady with ham hocks for arms looked in nervously from the door.
“Good God!” said the larger policeman. “He’s dead!”
He gestured to the man slumped in the battered arm chair.
“Dead drunk more like,” said the other peeler, picking up a bottle lying on the floor and sniffing at it.
The larger policeman sighed and gave the unconscious man a light slap on his face. He immediately sat up.
“What the… what is it… what’s happening?” he said, eyes darting around the room.
“It seems, Mr Michael, you have been asleep for a protracted period of time,” said the Policeman.
“My God, how long man? How much time did I lose?” said the disheveled looking writer. “Twenty four hours? Forty eight?”
Mrs Grobblewit walked into the room, her lips pursed.
“It has been over two months, Mr Michael,” she said.
“How can this have happened?” said Michael.” I had a… a visitor from the South West… he left a bottle… that’s all I recall.”
“Hmm,” said the smaller policeman, “I think we have all the evidence we need here.”
He turned to show the bottle to the others. It said, “Finest Medicinal Laudanum, Bottled in Porlock, Somerset. Good for All Ailments.”
—–
We here at the Benthic Times can only prostrate ourselves in apologetic humility at the appalling delay in our story telling. We have contacted the primary creators of the story in order to get a fuller understanding. Miss Pichette muttered something incomprehensible about robots and Mr Michael told us the above preposterous story. I suspect the truth will never become clear and we hope you will accept our grovelling apology and continue to enjoy the story. We have extracted the most profound promises that an absence of this sort will never happen again. We are, in truth, uncertain if we truly believe that