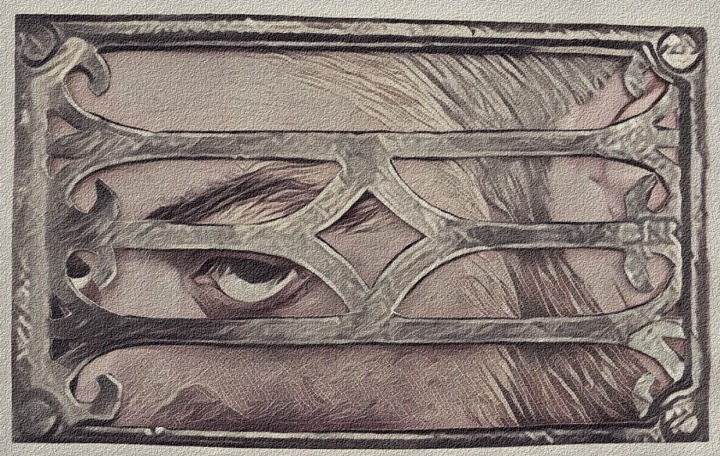 Clackprattle, Pook and Bisset stood in the dingy alleyway in front of the door. Bisset had a handkerchief over his nose and Clackprattle was sniffing profusely.

“Are you sure this rat infested pox hole is the place?” said Clackprattle.

“Hey!” said someone from a window overhead. “Watch your tongue, fatso.”

“Most assuredly,” said Bisset, muffled by the cloth. It almost sounded like he was stifling a laugh.

“Well then Pook,” said Clackprattle, staring sourly at the upstairs window. “Have at.”

Pook stepped in front of a old wooden door, noticing the feathers and guano stuck to it. He rapped lightly, doing his best to avoid contact. For a moment nothing happened and Pook went to rap again when a wooden panel slid back at head height.

A slender man’s head with a long nose appeared at the panel. The man’s head tilted side to side and back to front, never actually straight up. Finally the right side of the face was pressed against the hole and the man’s eye rolled around.

“What?” squawked the man.

“We are most delighted to make your acquaintance,” said Pook brightly. “We are assuming we are addressing a member of the Oisienne?”

The head bobbed up and down vigorously in lieu of an answer.

“That is indeed wonderful news,” said Pook. “We are, you see, here in order to undertake the challenge we believe it behooves you to administer to those who request it. I refer of course, to the challenge for the famed key of the weapon of Paris.”

The man’s head bobbed back and forth a little more.

“Wait,” shrieked the man and the panel closed.

“I do hope we do not have to remain here too long,” said Bisset.

“The difference between you aristos and me is that you’ve never seen an ounce of muck in your life,” he said jeeringly. “You don’t know what to make of it.”

He stepped back into some horse ordure.

“Bugger!” he said, and Bisset turned away a moment holding his cloth ever tighter to his face.

The door started to open then, and all three men watched it. A short man of an unusual style came out. His legs were exceedingly thin and were dressed in hose, whereas his torso was large and his bulging stomach, extremely bloated, poked out from his red waistcoat. He had a round face with a small pinched nose. Holding his hands behind his back he walked around them, nodding as he did.

He made a tutting sound and another strange gentlemen emerged, This one was unusually wide and had no neck. His eyes were round and the colour of amber. He waddled out into the alley as well.

“You come for the challenge?” said the first man. His voice was surprisingly thin and high.

“To wit?” asked the second.

“Indeed we most assuredly do,” said Pook.

“Which one?” said the first Oisienne, looking rapidly between the trio.

“That will be myself,” said Pook. “Mr Ernest Pook of Lancashire and latterly London.”

“Hmm,” said the red-chested Oisienne. “Next Tuesday. Sunset we gather.”

The two strange creatures returned into the building and the door slammed shut.

“Tuesday it is!” said Clackprattle in triumph before kicking out at a small creature scurrying around his feet. The creature seemed to catch Pook’s eye who watched it then smiled.