Marie sat in the chair in the bedroom and tried to calm her mind with some crochet. Sir John was with Lady Howarth and the Bishop and they were getting ready to start the third attempt to rid Grimley Hall of its unwanted guest. Marie was thinking of the crying boy, trying to solve the puzzle before it was too late. There was a knock at the door and she went over.

“Tea, Madam,” said a quavering voice outside the door.

“But I didn’t…” started Marie then opened the door. Outside was the maid from the day before. She held a silver tray with a pot of tea and a cup. It was shaking so much the tea things were rattling. Also on the tray was a set of letters, tied with ribbon.

“I’m sorry Madam,” said the maid, “but I couldn’t help overhearing you yesterday. About AC and EH and… and some letters. Alice Copsey. She’s my aunt, see. Well my great aunt. There were rumours of her and… and the old master…”

“Well, more sort of facts. They were sweet on each other ‘parently.  She told me about these letters what he wrote, showed me in secret. But she couldn’t read nor write, and she was embarrassed to say, Madam.”

The girl hung her head. “I can’t read nor write neither. She said, my aunt, I mean, she said when he left, he never said a word of goodbye to her and when he come back, he wouldn’t go anywhere near her. He were like a different man. I thought maybe you could find out what happened. And maybe it’s something to do with all this business, like what you and Sir Jenkins was saying.  She said it broke her heart Madam, when he left. She’s never looked at another man all her life, not even now in her dotage.”

And with that the girl, turned and practically ran away.

“The letters spell it out,” said Marie. She sat back down and looked at them all. The first few were love letters from an Edward Howarth to Alice Copsey. He regaled her with fine words and regretted the circumstances that kept them apart. Marie snorted. She looked at latter letters and he was worrying about his forthcoming enlistment to the navy, how he would miss her, how he feared she’d find someone else. Marie went to the last letter and started to read. 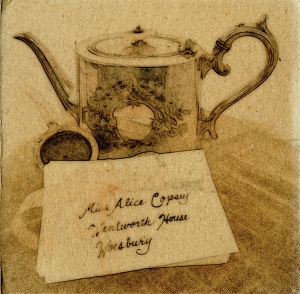 “I have a made a plan, a wild plan, maybe, but one I will carry out. I have spoken with Robert and everything is arranged. On the day we leave for Portsmouth, I’ll stop the carriage by the woods, and will go deep inside. Meet me where we went last summer and sheltered from the rain. Robert will disguise himself as me and will join the Navy on my behalf. His friend Cuthbert will go disguised as him.  It will be a good life for Robert, being a naval officer, better than he could have hoped for. As for us, I shall bring a little money and we can elope and start a new life. We will be poor Alice, but we will be together. I gladly, madly throw this manor, title, and fortune away to be with you. I choose you Alice. I choose you.”

“It’s beautiful,” said Marie, “but it’s not what happened. What happened to you?”  She said it idly to herself then looked up and, with no surprise, she saw the apparition looking at her. The ghost boy pointed at the Thanatograph, which began to spin without assistance…

“Where is she? I don’t understand,” said a voice. “You gave her the letter, Robert?”

“That I did, Edward. Same as all the others,” said another voice.

“Then why isn’t she here,” said Edward. “Your friend Cuthbert manage to make it.”

“Maybe because it’s cos she can’t read,” said Robert.

“She can’t… then how did she read the others?” asked Edward.

“She didn’t, but she was too embarrassed to say, and you was too arrogant to ask,” said Robert.

“Well, if she hasn’t read it, she doesn’t know I’m here,” said Edward.

There was a nasty sound, wet and harsh, and Edward made a gurgling sound.

“But, I gave you everything,” moaned the dying Edward.

“Let’s just say I wants to make sure you ain’t coming back, if you changes your mind.”

The Thanatograph stopped, and Marie leaned back. “Mon Dieu,” she said. The boy with the tear pointed at the Thanatograph again and it spun some more.

“Why are we stopping here?” said Cuthbert, but it was a new voice, a man’s voice.

“I want the staff to go ahead, make sure that all the old faces have left in case they recognise me, and make our bedrooms nice and warm.” said Robert’s voice, sounding rougher, older, and more assured.

“But why here, Bobby, of all places. It gives me the creeps, you know, when I think about it.”

“Oh grow up, Cuthbert. And it’s Lord Edward to you. Here, get digging, we’re going to take him, or what’s left of him back to the Mansion so no-one ever finds out.”

“Why me, though?” wailed Cuthbert.

“Well for one, I’m Lord of the Manor now, and for another, because you done him in the first place.”

“Don’t remind me,” moaned Cuthbert. “I sees him in my mind every day.”

“Oh cheer up – look here’s ten pounds, you can take that to the tavern afterwards and see if you can’t forget your worries.”

The Thanatograph ground to a halt and Marie ran out of the room, heading to the exorcism.

Sir John and Marie took a trip to another dimension and had a good time. Marie made a friend, and Sir John only moderately disgraced himself…

Here at the Benthic Times we were delighted beyond belief to receive the artwork for the forthcoming Jennings and Jennings collection. We would like to offer thanks and felicitations to the talented and wonderful Aiko Tagawa. 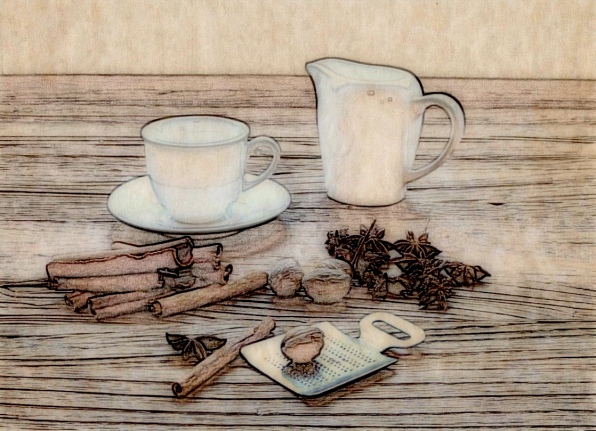 We have been inundated today by an unbelievable number of readers asking us exactly what  was the milk drink that Mr Bosch, from our hit story The Cornish Curse, was drinking before his bedtime. A flurry of rumours floated around the internet, forcing us to remind folk that Phlebotomous might be a vampire, but he is a vegetarian. To quell further rumours and to allow people a taste of The Benthic Times, the recipe is produced below:

Combine ingredients in cup. Allow to settle so tastes infuse (but not too much so milk grows cold). Take to room and drink. Turn out light. Turn light back on again when you realise it is still a little dark and hence frightening. Sleep until evening.

Does this man appear to be a professional?

A number of readers have expressed interest in learning more about the manner in which The Benthic Times is produced to such a high, professional standard on a weekly basis. There have even been stories suggesting that Mr Michael and Ms Pichette are mere fictions and that the magazine is produced by a crack team of professional writers and artists. Flattering though such allusions are, we can categorically state that these rumours are false.

We present as evidence the drawing above, rendered by Ms Pichette, of Mr Michael in the midst of creating another thrilling yet amusing story. One glance at the writer at work reveals the keen intellect of the literate mind whilst the image itself speaks volumes  to the magisterial aesthetic vision of a true talent in the artist. We hope this small insight into the world of The Benthic Times satisfies some of our readers’ fascinations and expands their enjoyment of partaking of our modest yet scintillating artistic endeavour. 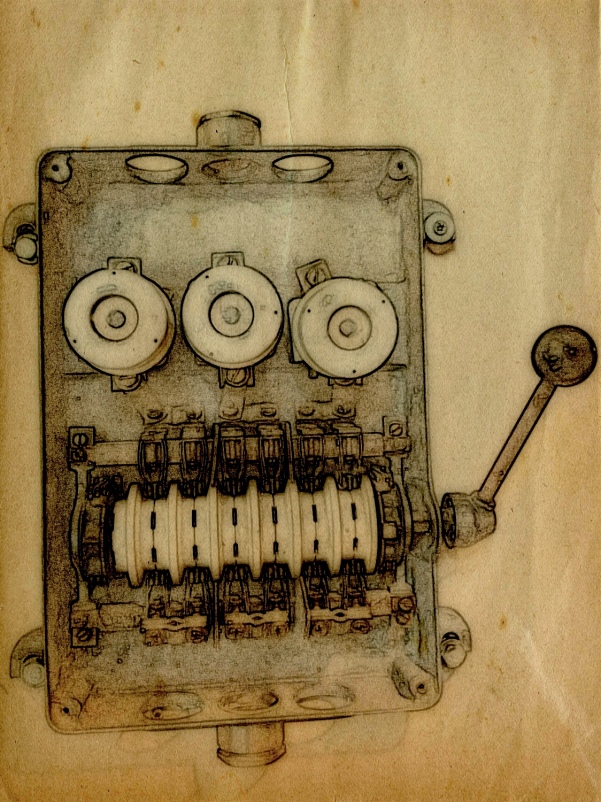 “No automatons were harmed in the making of this post.”

Whilst enjoying luncheon at one of our favourite haunts in our hometown, our eyes were drawn to the curious contraption above which was affixed to the wall. Speculation flowed imminently as to its origins and purpose. After a protracted debate over a delicious fish soup, the conclusion was that it must have been the head of a serving automaton. Debate One terminated, the next topic of conversation was on what might possibly be the automaton’s name. Sadly, the bill and complementary liquor arrived before we could conclude, and other matters took up the day. So we invite you, dear Reader, to consider this topic and comment if it pleases you.

“The newest member of the menagerie…”

We hope you are enjoying a pleasant Friday with the promise of a thrilling week-end to come: sipping schnapps, nibbling corn-based savoury snacks, and enjoying the first episode of our latest series. In the interim, we have found this most delightful blog post on a topic close to our hearts. We wish you the very best of weekends. 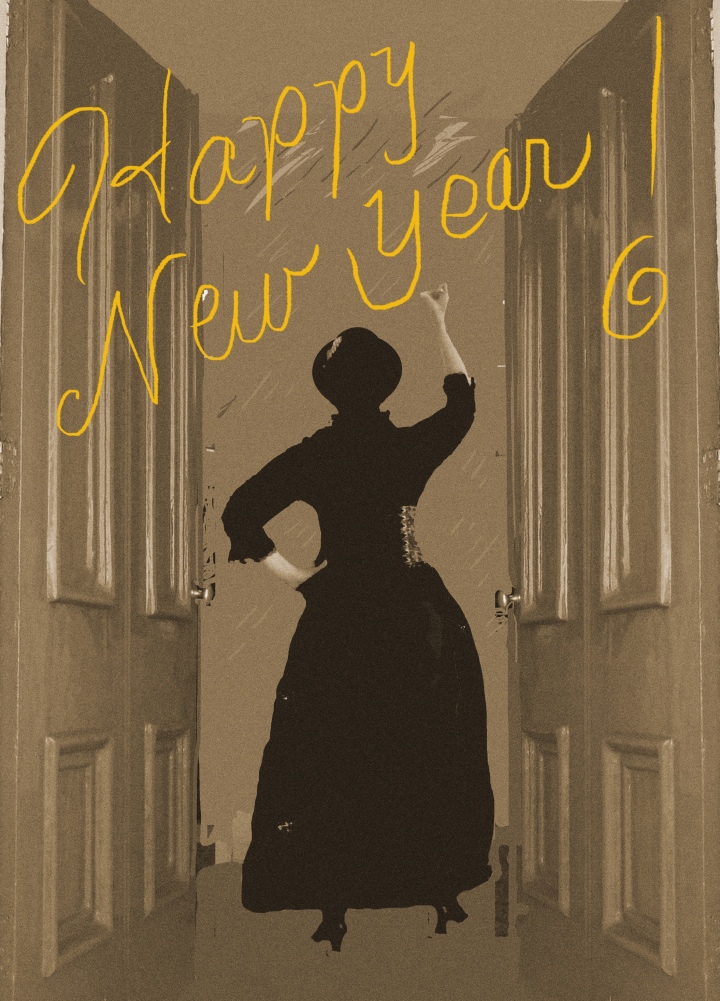 invasion of the body snatchers

I wish these ants were herbivores…

Despite the extraordinary demands of NaNoWriMo, we at the Benthic Times still find time to indulge in the pleasures of gardening. Or should we say challenges… Our new home has presented us with a spectacular assortment of weeds and exotic native plants. We’ve given up on the idea of recreating an English country garden and have settled upon an array of alien-looking cacti.

A Random Name Generator – as we imagine it to look

During an interesting writing session this week, the Benthic Times found itself uncharacteristically stuck for a name for one of our characters. Whilst a ten-mile walk through the countryside would be the normal cure for this malaise, time was of the essence. As such, we turned to that modern miracle, the internet and found this little gem:

Amongst the many humorous names that we derived is the one that currently graces the title above.

We wish you a most pleasant weekend.