Sir John and Marie were sitting in the parlour when Miss Henderson opened the door.

“Your guests are here Sir and Mrs Jennings,” she said. Sir John glanced at Marie who looked a little surprised. Symonds, Dawlish, and Phlebotomous came into the room.

“So sorry about our previous encounter,” said Phlebotomous to Marie.

“A perfectly understandable mistake,” said Marie, “but one best not repeated, perhaps.”

Phlebotomous opened his mouth, stopped then closed it again. Dawlish shot a quizzical look at Symonds who looked embarrassed. At Sir John’s indication all three men sat down.

“We thought Mr Bosch may be able to help with his … specialist knowledge,” said Symonds.

“Since I’m a vampire!” said Phlebotomous.

“Indeed,” said Symonds. “It was quite some effort to get him here. And no small expense in drapery.”

“But congratulations are in order, Mrs Jennings,” said Dawlish. “You have found the fiend.”

“Indeed, Inspector Dawlish,” said Marie. “More accurately, I have located the building where I believe he resides. After the incident last night I was able to track him until he entered. It didn’t seem safe to enter the building itself.”

“Remarkable,” said Dawlish. “How did you accomplish this, this swine has given my men the slip for weeks.”

“Yes,” blurted Phlebotomous, “that’s why! She is very lucky!”

Dawlish and Symonds looked puzzled at the vampire.

“Well, however it was done, I have a man watching the building, but one man won’t be enough. If only we knew when he was going to strike. The killings are getting more frequent.”

“Tell us the dates,” said Sir John, “we may be able to see a pattern.”

“At first it was around once a month, then almost once a week and now we’ve had 2 in 2 days.”

“Around a month?” said Sir John. “Is it a lunar pattern?”

“Here are the dates,” said Dawlish, passing Sir John a note. Sir John dug an almanac from the bookshelf and compared.

“The first four are all on a new moon,” said Sir John. “Then, the next four are the quarters of a moon. The ninth, the one that occurred when we went to, er, meet Mr Bosch, was less than a week after that. Then yesterday the murder Marie witnessed.”

“Once a moon, once a quarter, once a day,” said Phlebotomous.

“Does that mean something?” said Symonds, “to a vampire?”

“Not really,” said Phlebotomous. “But it has a ring to it.”

“I think it means that the fiend is getting to the end of his killing, for whatever purpose it is,” said Sir John. “And the next murder will be tonight.”

“If we lay a trap, we can catch the swine,” said Dawlish. “If we had a suitable lady to tempt him…”

“Why obviously?” asked Phlebotomous. Symonds leaned forward and whispered into his ear. Phlebotomous went a light shade of pink.

Just then, Miss Henderson arrived with some tea and biscuits. The room was deep in thought as she placed them on a small table, keeping away from Phlebotomous. When she had finished laying out the cups, saucers and plate, the vampire extended an arm towards the items. A small mechanical grab, on the end of an extendable arm, came out of his sleeve and headed for the biscuit plate. When it arrived, it tipped the plate over onto the floor, spilling the contents under the table.

Mrs Henderson bent under the table to pick up the biscuits. The room was still silent when Phlebotomous leaned forward excitedly.

There was a crash from the table as Miss Henderson tried to stand up quickly. She crawled slowly out from underneath.

“Oh dear, my head,” Miss Henderson said. “I’m sure I must be hearing things.”

Marie went over to help the maid and escorted her out of the room. 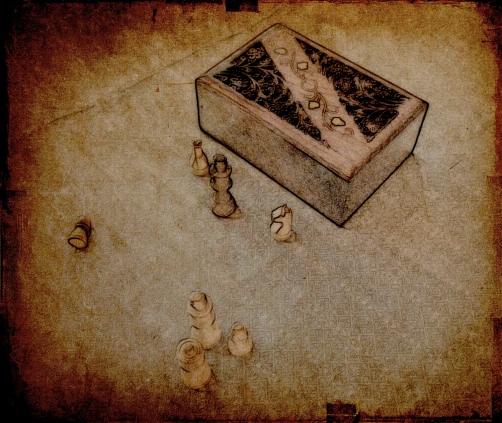 “Badly put, but he has a point,” said Dawlish half to himself. “Sir John, I want to show you the layout of the area, and what I have in mind. Do you have something I might use so I can demonstrate on this table top?”

Sir John looked around the bottom of the bookshelf.

“Will this help?” he said. Dawlish’s moustache twitched in amusement.

“Almost too apt,” he said. “Alright, imagine this piece is the maid and this box is the house. My men will hide, in the alleyways with crucifixes and water. You and Mr Bosch can be here, at a safe distance, but ready to offer advice if needed.”

“Well, whoever comes, when the fiend comes out to catch our bait then my men come left and right. And we have him.”

Marie came in the room.

“Miss Henderson is both capable and willing to assist this evening,” she said.

One thought on “The Fulham Fiend: Chapter 12”