The Fiend turned again to Miss Henderson. He walked lazily toward her.

The maid screamed,“This is for Veronica!”

She grabbed two sticks hidden amongst her flower tray. In a deft motion, the maid dropped the tray and snapped the sticks together end-to-end to make a staff. She held the staff behind her on the right and held her left hand in front of her. The Fiend stopped and looked down at the maid, who spun round suddenly. The staff smacked into the Fiend’s head with an audible clang and he rocked sideways. Miss Henderson span back the other way and hit the Fiend on the other side of the head.

It staggered back briefly as Miss Henderson continued spinning round, moving to ground level. The staff connected with the Fiend’s legs, but he didn’t give way. He brought down his arms to catch the whirling maid but she blocked his arms with the staff. He pressed down heavily on the staff and Miss Henderson held on, roaring at the Fiend. Eventually she jumped back and let go in one move and the Fiend toppled forward onto the ground.

Further down the street Sir John was picking himself up. He looked at Marie who was sitting and gasping for air as Phlebotomous ran toward them with his hand over his mouth.

“It’s what?” said Sir John. The vampire moved his hand away from his mouth.

“My God, what shall we do, it’s got Miss Henderson cornered,” said Sir John. The two looked around and saw Miss Henderson beating the prone Fiend as it started to rise.

“She cannot ‘old it off forever, I think,” said Marie, coming to join them. “We must do something, mon cher.”

“Your light device, how does it work?” said Phlebotomous.

“Well, it’s just a collection of filament bulbs, albeit with a very strong charge,“ said Sir John holding up the device.

“The Fiend’s eye sockets are in the head,” said Phlebotomous. “I’d wager there is some other computational components there, too. Maybe we could deliver that charge to its head? The shock may disrupt its circuits.”

“Yes,” said Sir John, “good idea. We’d need some technical means of bypassing the photoelectric circuitry so we can expose the wiring.”

Phlebotomous reached for the lightbulbs and wrenched them out.

“That would do it,” said Sir John. “But how are you going to reached the Fiend’s head.”

“With this extending arm and my portable welding device,’ said Phlebotomous. Marie and Sir John instinctively stood back. The vampire took Sir John’s light device. He extended the arm grab from his right arm and produced a small welding gun on the left. He hummed merrily as he welded the device to the grab. 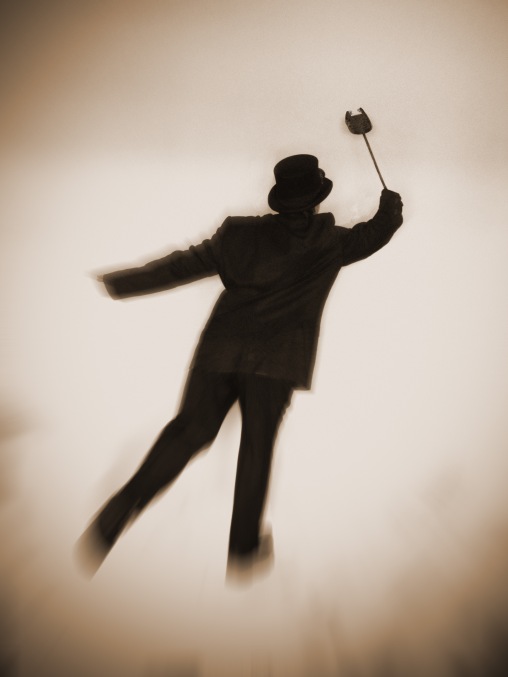 From several feet away Marie and Sir John observed the vampire working. Miss Henderson meanwhile had just been knocked to the ground but smoothly rolled back and onto her feet. Across the street Dawlish was rising and seemed to be contemplating joining the fray.

“Ready,” said Phlebotomous and again issued his strangled war cry as he ran toward the Fiend. He got within a few feet before turning round and running back again, still making a noise like a distressed cat.

“That, sir, is an unfortunate stereotype,” said Phlebotomous.

“But,” said Phlebotomous, “I’m rather scared of heights.”

“Think of poor Miss Henderson,” said Marie as a shout of rage came from the maid at other end of the street.

Phlebotomous gulped and started to run again, his battle cry now more of a wail.

“Voler”, said Marie and the vampire rose several feet off the ground and his battle cry rose several octaves. He flew towards the Fiend and applied the device to the back of its head. Sparks of electricity flashed across the Fiend’s body and it convulsed violently. Miss Henderson stopped her attack to watch with glee. Eventually the sparks stopped and the Fiend stood immobile, whilst Phlebotomous floated a little distance away.

“VENGEANCE!” roared Miss Henderson and using her staff as a vault, launched herself at the Fiend. He fell backwards and she landed on top of him. She grabbed the staff and whacked the Fiend on the side of the head. His face plate came off and skittered along the floor. Miss Henderson looked down in surprise.

“What is it?” said Dawlish.

“How does it work?” said Phlebotomous.

They both peered into the hood to see a man inside the metal suit.

“Who the devil are you?” said Dawlish.

“Wouldn’t you like to know!” said the man. He licked his lips, then pulled back on a tooth with a clicking sound and his face glazed over. Sir John arrived and looked down.

“What happened?” he said. Dawlish crouched down to look at the Fiend’s face, his fingers on the man’s neck.

“Poison pill,” Dawlish said. “In his tooth. The Fiend is dead.”

One thought on “The Fulham Fiend: Chapter 14”