“As you say I grew up in a small village, but my mother hadn’t always lived there. She had grown up with her sister in Paris and moved just before I was born. I don’t know why, but it seemed something bad had happened to her there. That’s not so strange I think in a big city. So I suppose she wanted me to grow up somewhere safer.

“The problem was the place wasn’t safe, but for an unexpected reason. Because of me. When I was young I found I could influence things around me. People a little, but mostly animals. Never anything inanimate, just things that thought. Everyone thought I just had a way with animals, as they would always come to me. They had no idea I was calling them.

“The problem with villages is that there is no escape from people there. Everyone knows everything about you. The other children were jealous that I was considered special, and I had few friends. Then one day, I saw him.”

Marie stopped to have some soup. Sir John was looking at her closely as his soup was all gone.

“I don’t know,” she said, “I mean I don’t know what he was. One day I was walking alone by the river making the ducks swim alongside me when I saw a man fishing. When I got close though I saw he wasn’t a normal man. He was very short with hairy legs and with horns.”

“Maybe,” continued Marie, “I stared at him for a while and he turned to look at me and said ‘Oh, a little witch.’ I knew the word was bad, and I was scared of the creature so I ran. I tried to tell my mother but she didn’t listen and said I was making up a silly story. I thought maybe I was myself, so I asked the children in my school if they had seen him. They all said they had and that we should all go and say hello. I was quite surprised. After school we all went together and I felt pleased to have some friends at last. When we got to the spot by the river I saw the strange man, the faun, again. I said hello to him but all the other children just laughed at me. They said – you know children can be cruel – they said I had no friends so had to make up an invisible one. I was so upset pointing to the creature asking if they could see it and they just laughed harder and harder. Eventually, I just shouted ARRETER and they did. They all froze solid. 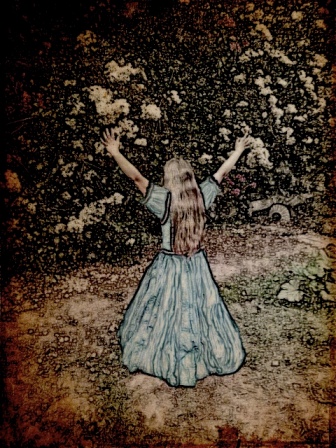 “The creature said ‘Very good little one, that will show them,’ and then he turned and disappeared. I didn’t know what to do, surrounded by these frozen children. I ran to my mother and brought her to the children. When she saw them, she screamed. She shook me asking what happened, and I was crying saying I didn’t know. I said I wished the children would move and suddenly they all did again.

“No-one at all spoke to me after that. Within a week my aunt and uncle came. They took me to Paris. The last time I saw my mother was from the back of the carriage. I was never allowed to visit her and she never came to see me.”