Sir John and Marie sat in the front room of their home in London with Phlebotomous Bosch. Marie was crocheting, Phlebotomous was tinkering with some mechanical device and Sir John was reading The Times when Miss Henderson came in. The room was quiet apart from the rhythmic snoring of Morag, lying by the fire.

“The afternoon post has arrived,” Miss Henderson announced and handed Sir John a letter. He took it and opened it.

“Ah, it’s from the Mallums!” he said. “They send their greetings to everyone, including you Miss Henderson, and thank us again for our help.”

“Well, we only uncovered their, er, problem,” said Sir John. “They go on to especially thank Morag for giving them the details of the tincture which reduces the symptoms of their daughters’ condition. Apparently they are now able to function normally during a full moon without, well, transforming.”

Morag lifter her head up from where she had been dozing by the fire.

“Ach, it’s nothing,” she said, “just a case of balancing the silver out with some extra gold.”

“Yes,” said Sir John, ”they mention how pleased they are that their farm labourers have returned to work for them as the gold is quite expensive. Apparently, the girls all asked to be remembered to Phlebotomous and reiterated their sorrow and embarrassment at the final night.”

“It was quite a scare,” said the vampire. “It’s made me think about possible future romantic attachments. I think it wise if I keep to the bachelor life. However attractive I may be to these girls, I think it’s for the best all round.”

Miss Henderson unfortunately had a small coughing fit at that point, which she covered with a handkerchief. Marie stared quite determinedly at her crochet as her shoulders gave a small shake.

“Sounds very sensible Mr Bosch,” said Sir John. “They also say that they fear news of the incident may have spread. Apparently Marsh left their employment shortly afterwards and started working for Lord du Bois. Now, Lord du Bois is rarely seen in their house. Mr Mallum is somewhat distressed by this and fears the worst.”

“He seemed more like a man’s man,” she said, by way of explanation.

“Yes,” said Sir John,” I believe you are right. Anyway, they conclude by saying all is well and we are welcome to visit any time.”

Sir John folded the letter and put it down.

“Another satisfied customer,” he said. “Miss Henderson, perhaps we could have some tea and biscuits.”

“Oh. They have informed us that the payment will take a little time to arrange,” said Sir John sounding glum.

“Well, we have plenty of money after the alchemist, ne c’est pas?” said Marie.

“In lieu of the first payment they have sent us this drawing by Prudence,” said Sir John. “It’s of Mr Bosch.”

Marie and Phlebotomous looked at the drawing. They both frowned in unison

“I think it’s what you call the … modern style,” said Sir John. 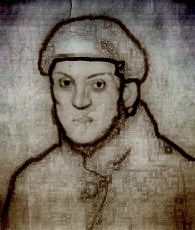 *With apologies to Pablo Picasso…

2 thoughts on “The Cornish Curse: Epilogue”