The rain lashed down on the window of the Friendship Tea Rooms as Sir John and Marie stared out.

“Perhaps it will brighten up this afternoon,” he said morosely. “How long until we can return to the bed and breakfast?”

Marie looked at the clock on the wall, with the numbers 4 and 6 missing.

“About seven hours I think,” she said.

Sir John took the last sip of lukewarm tea in the cup in front of him, and put the cup down on its chipped saucer. Almost immediately the waitress appeared.

“Can I get you anything else,” she asked blankly.

“I think we’re alright for a moment,” said Sir John.

The waitress immediately glanced at a sign saying “no loitering”. Marie looked around the room, empty save for a dishevelled looking man in a gaudy outfit nursing a cup of tea. The waitress peered out at the rain.

“You’ve been unlucky with the weather,” she said. Sir John sighed.

“Two more teas, please,” he said and the waitress went away. 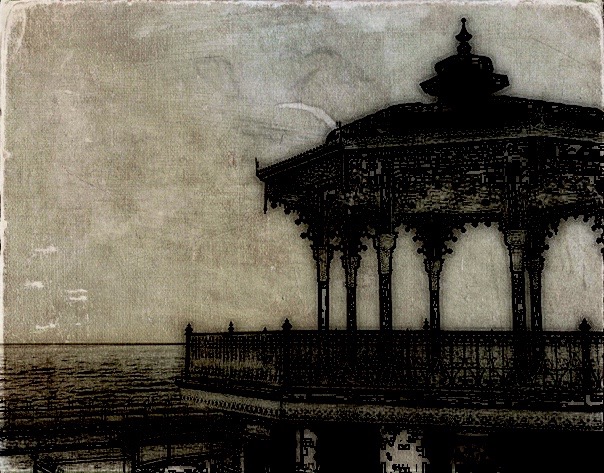 The other man in the cafe turned his tea cup upside down and spun it round. Sir John looked on curiously.

“Is he alright do you think?” he said. The man turned his cup back up and peered at his saucer. He look surprised then glanced toward Marie and Sir John. Sir John looked down quickly as the man walked over.

“Please excuse me,” said the man, “but I do believe we have a common interest. My name is Lord Hollingbury, and, if my Aunt Mabel’s parlour trick isn’t mistaken, at least one of you is, shall we say, in possession of special talents.”

Sir John looked confused at the apparent gap between the man’s appearance and manner.

“Well, if you need me to pardon you, you must have done something very wicked,” said Lord Hollingbury sitting down.

“Two teas,” announced the waitress as she returned. She looked distastefully at the development of social intercourse in the tea rooms and beat a hurried retreat in case it was catching.

“Let me get down to brass tacks,” said Lord Hollingbury. “I am, shall we say, gifted myself in certain areas. One might call me a magician, if you like, but I prefer the term Nouveaumancer. You are … well one of you … and I think I know who, is most certainly gifted.”

“The tea leaves tell you this?” said Marie.

“Indeed, I was carrying out a little old-fashioned divination” said the Nouveaumancer. “I think even magic has a certain … terroir, ne c’est pas?”

“Yes, you do,” said the Nouveaumancer, “I told you. The reverse is true, I don’t know who you are.”

“I am Marie Jennings, and this is my ‘usband Sir John Jennings,” said Marie. “Pleased to meet you.”

“Enchanted,” said the Nouveaumancer, “and enlightened. You’re the investigators of the paranormal, aren’t you? I read about you in the papers. I had no idea that you were … poachers turned gamekeepers.”

“We’ve done that part and moved on a little,” said the Nouveaumancer. “Do try and keep up. So I presume you’re here to investigate the disappearances.”

“You can’t say things like that to a chap’s face,” said Sir John.

“Well which part of a chap should I address these remarks to?” said the Nouveaumancer.

“Please, both of you,” said Marie, “Lord Hollingbury … what disappearances?”

“Oh, I see,” said the Nouveaumancer, “so you ‘don’t know about the disappearances’ and I’m guessing you’re ‘just here on holiday’.”

“Oh, well that’s a shame,” said the Nouveaumancer, “I was rather hoping to pool resources. Oh well, if you change your mind, you can probably find me at the Cock and Bull. It really is the only place in town to get half decent scotch.”

The Nouveaumancer stood up and left the tea rooms. As he walked through the rain it seemed to somehow fall around him.

“Has he gone?” said the waitress who had appeared mysteriously.

“I believe so,” said Sir John.

“Well you can have his bill then,” she said, passing the couple a small piece of paper.

One thought on “The Sunnyport Shadow: Chapter 1”