“It would probably help if you rowed a bit as well,” said Sir John, pulling on the oars in the little boat.

“I’m not the sort of chap to row,” said Lord Hollingbury. “I might get callouses on my hands, and then what would people think?”

“Then why do you own a boat if you don’t row?” said Sir John.

“I don’t own a boat,” said Lord Hollingbury, sounding perplexed.

“But you said we could use this boat,” said Sir John.

“I said we could use it,” said Lord Hollingbury. “I didn’t say I owned it.”

Sir John stopped rowing and the boat came to a halt.

“Are we?” said Lord Hollingbury. “Gosh, you’re rather racier than you seem. I had intended to give it back.”

Sir John continued rowing in silence. After a pause he spoke.

“You say the nicest things,” said Lord Hollingbury. “But look, we’re nearly there, I think. The energy was arcing to this spot, wasn’t it?”

Sir John shined the lantern over the side.

“What are those things?” he said, half to himself.

“Some sort of jellyfish maybe?” said Lord Hollingbury, staring down at the mass of yellow which surrounded the boat. “No, they don’t have tendrils. They’re more like … thin disks of translucent yellow. Looks like a sort of rubbery material.”

“Probably best not to touch them,” said Sir John earnestly. Lord Hollingbury shot him a look.

“So is this what the bizarre congregation were doing?” he said. “Communing with aquatic prophylactics?”

“Does it seem like there are more around the boat now?” said Sir John. “That they are clustering somehow?” 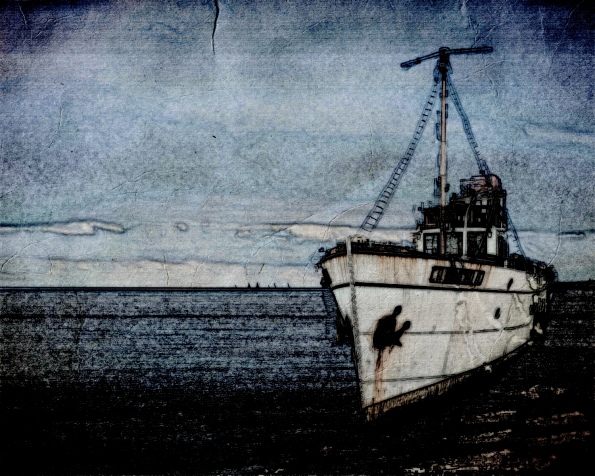 “Ahoy!” shouted a voice from a little way off. The two men looked up to see a fishing boat moving towards shore at speed with another one close behind. At the front of the first was the man that had called out.

Sir John immediately starting rowing back to shore. There was a cry and a splash from the second boat heading to shore. A man floundered in the water.

“Leave him!” shouted the fisherman on the first boat, “Save yourselves, it’s too late for him.”

Lord Hollingbury focussed the lantern toward where the man had fallen in. He was thrashing about in the water and dozens of the yellow jellyfish were crawling over him. He screamed one last time as one slithered over his face, and he was silent.

“Promise you won’t tell anyone I did this,” he hissed as he started to row.

3 thoughts on “The Sunnyport Shadow: Chapter 8”