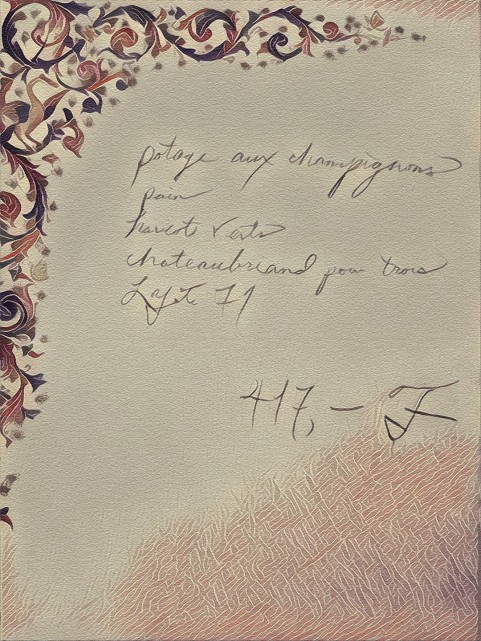 “I’m sorry, how much exactly?” said Sir John looking alarmed. The waiter pointed to a total at the bottom of the bill and Sir John recoiled a little.

“Is that because of…the incident?” said Sir John.

“Because of the wine,” said the waiter sourly. “The scene is free of charge.”

Sir John pulled out a large number of notes and handed them over. The waiter looked at them.

“It is customary to leave a tip,” said the waiter. Sir John sighed and added another note.

“One that is not derisory,” said the waiter, and Sir John added yet another note. The waiter looked at the pile with mild disapproval but took the cash.

“In return, I have a tip for you.” said the waiter without humour.

“Find a better friend,” he said and left.

Marie took Sir John’s arm and they walked away from the restaurant, heading north.

“Well that was embarrassing,” said Sir John. “But the right thing to do.”

Marie smiled at her husband.

“I’m sure Emile will say otherwise,” she said.

They wandered for a little while in silence looking at the buildings covered in posters. Everywhere there seemed to be exotic curling letters and botanical shapes. An artform sprouting fresh from the city walls.

“This style is very…new” said Sir John. “I don’t remember it last time.”

“It’s a bit…curvaceous for me,” said Sir John, gesturing. “I prefer something more…”

“I would say Classical,” said Sir John. “Do you like it?”

“It’s very…natural,” said Marie. “I like how it makes the city seem more organic.”

Sir John wrinkled his nose as they went past a blocked drain.

“I’m not sure that’s what the city needs,” he said. They turned a corner and faced the Ille de Paris and the Seine.

“This is more like it,” said Sir John, looking at the vast building opposite.

Marie pulled her husband by the hand over the bridge, walking at pace. Sir John could barely keep up as they weaved through the crowd.

They stopped at the edge of the cathedral and Marie looked around. She pretended to tie a shoelace as a couple walked passed then looked up when they had gone.

“May I present,” said Marie pointing at a gargoyle, “Albecht.”

The gargoyle’s eyes moved side to side and then he moved to look down and Marie and Sir John.

“Is this him?” said the Gargoyle in French, “I thought you said he was handsome?”