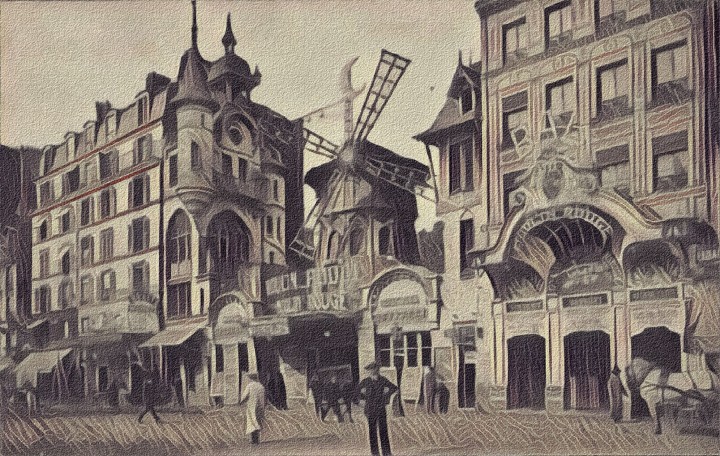 Sir John and Emile pushed through the drunks and raucous groups spilling from bars, theatres and clubs of the most dubious kind.

“Are you looking for a good time?” said one hideously painted lady to Sir John as he walked passed.

“Not especially,” said Sir John and hurried away. “You know, I thought it might be useful to have Marie or Miss Henderson with us, but I do believe you are right. This place is the worst kind of sordid hell hole. What kind of lascivious swine would gain pleasure from being here?”

“Hey Emile, are you coming in tonight?” shouted a barman as they strolled down Rue Lepic.

“Hey Planquette!” shouted the barman. “Are you deaf, man?”

“That’s a common name as well,” he said. “Half of Paris is called Emile Planquette.”

They stopped in a square and looked around.

“We are pretty much out of Montmartre,” said Emile. “And no sign at all.”

“Hey,” shouted a large man with a red face and big beard, surrounded by a group of men. “What are you two looking for? A woman?”

“Ignore him,” said Emile. “We must have missed something. It seems like we’ve been down every street, though.”

“A boy?” shouted the man. Sir John glanced over, but Emile was impassive, facing away from the man.

“Has the topography changed recently?” said Sir John. “Some change of energy perhaps, to make the map wrong?”

“A sheep?” shouted the man to howls of laughter from the group. Emile pivoted round.

“Monsieur!” he shouted. The man smiled back at him.

“It’s just the lamb here is delicious,” he said.

“Look out,” said Sir John and pushed Emile into an alleyway. The bearded man and his entourage laughed even harder. Emile was about to speak when Sir John put a finger to his lips. Clackprattle and Pook walked by the alleyway. Emile gasped then put his hand over his mouth. The men hid as the two walked down the road a little. Sir John looked at the building their adversaries had emerged from.

“Tsch, of course,” said Emile. “The Moulin Rouge. I assume that’s the famous Clackprattle and Pook.”

“Indeed,” said Sir John “and moving with some purpose. I suspect they’ve found the elemental. We should go in at once. I hope we’re not too late.”

“You think they may have completed the challenge?” said Emile. “A physical challenge? But… one is so fat and the other so scrawny…”

“Then there’s no time to lose,” said Sir John. ”Let’s go in there and find out what it is.”

Sir John and Emile strode out of the alleyway. The group around the bearded man regarded them with curiosity.

“You know,” said Emile, “on reflection we probably should have brought the maid.”

Sir John’s response was lost in gales of laughter.