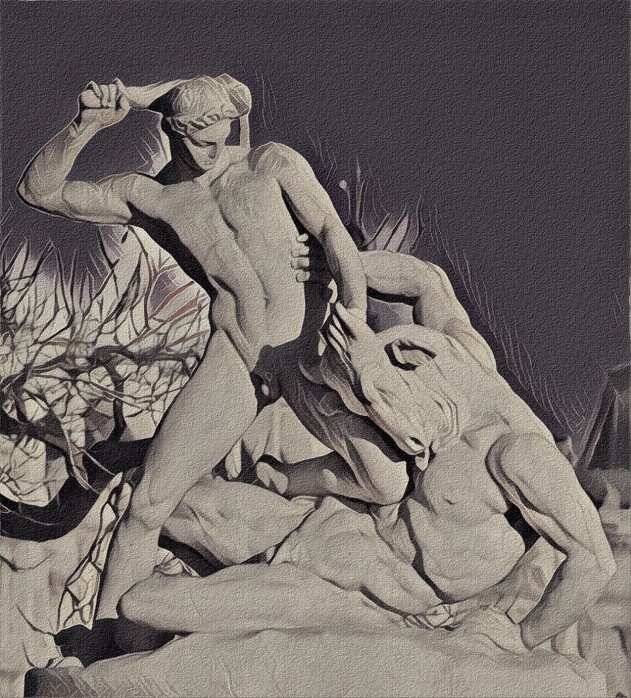 Emile and Sir John looked up at the statue of Theseus and the Minotaur in the Tulieries garden.

“I think so,” said Sir John, “but that seems rather a tenuous link. I sort of imagine something more…”

“Obviously aquatic?” said Emile. “Yes I agree, I don’t think this is it. How many have we seen now?”

“I’ve rather lost count,” said Sir John, “along with enthusiasm.”

He looked around the park at the multitude of people walking about, picking out two women with a dog.

“I don’t think the others have had any success either,” he said.

Emile sighed. “Next one then?” he said.

“You know, I wondered if I might, if I could,” started Sir John. “I mean to say, well I notice you haven’t been at the church so much recently.”

“I have been… busy,” said Emile. “I have an institute to run you know?”

“I just realise that we haven’t really spoken about… what happened,” said Sir John. “When you found out about Marie.”

“Oh God no, you don’t want to talk about my feelings, do you?” said Emile smirking. “We’ll be here all week while you navigate around the topic.”

“Well,” said Sir John, a little deflated. “It seemed to, change things. I know what it’s like to have that surprise. When I first found out it was… things were… there was some awkwardness.”

“You’re English,” he said, “there is awkwardness when you buy of cup of tea in a cafe.”

“Yes but,” continued Sir John, going increasingly pink, “well, it seemed to, erect a sort of barrier between us as friends and, and…”

“You are concerned about my erection now?” said Emile earnestly before bursting into laughter. Sir John went bright red.

“Oh mon Dieu, I’m sorry my friend,” said Emile, wiping his eyes. “I’m being cruel to you. Yes it was a shock, and yes I felt a little hurt that you didn’t tell me. But I understood why. It’s not you two, or even Sabine that’s keeping me away. It’s all of you. It felt like everyone had special secrets and I, whose job is to find special secrets, not only had none, but had no clue about any of yours. It felt… like I had no purpose, I think.”

“You’re my friend,” said Sir John, “You don’t have to have a purpose.”

“Hmm,” said Emile and looked back at the statue. A little smile crept on his face. He lit a cigarette and fell silent.

“We have not seen a single statue with merde on it,” said Miss Henderson, arriving at the scene.

“That’s mer, Miss Henderson,” said Marie, holding the lead with Morag on it.

Emile turned away to stifle a laugh as Miss Henderson looked up at the statue.

“Good Lord!” she said, “Have none of these artists heard of undergarments?”

“I think not,” said Sir John. “We’re back to the drawing board.”

“You know, I can think of someone who might be able to help,” said Marie. “We are not far, why don’t we go speak to Albrecht.”

Emile threw his arms up in despair.

“What have I ever done to you,” he said to the sky, “to deserve this?”