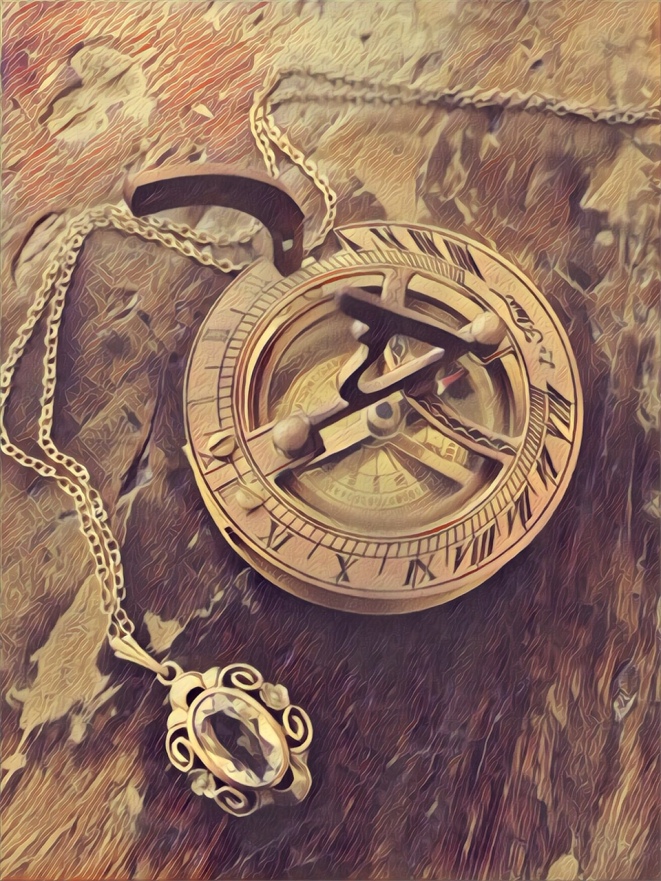 Sir John looked at Marie. He was feeling exhausted and a little anxious from the encounter with the Walrus and had not yet had a chance to speak to Marie. He’d noticed she’d been preoccupied with the pendant and the moondial she had acquired and had barely met his eye.

“What is it?” said Sir John nervously.

“I think I have figured this out,” said Marie, holding up the moondial and the pendant. “You see they have the same stone, and when they are together the compass behaves strangely.”

“I see,” said Sir John, who was thinking it wasn’t just the compass behaving strangely.

“It points south,” said Marie. “When they are together. Not north”

“Maybe that necklace is a little magnetised?” said Sir John.

“No I checked,” said Marie. “No matter where I place the necklace, it always faces south. Do you see?”

“You know what I think this means?” said Marie. “I think it is pointing to my mother, or a connection with my mother, somehow. The necklace and the moondial are from my family.  And the moon… not a sundial, you see? I think it is a way to find them.”

“But Marie, your mother is dead,” said Sir John. “You said your aunt told you.”

“She said many things,” said Marie, “not all of them true. She was not even my blood relative, that was my uncle. The Walrus said, well, it implied she might be alive, that my aunt might have lied.”

“You think the Walrus told the truth?” said Sir John.

“It said that it told, what was it, emotional truths?” said Marie. “I don’t know, but I know that there is a chance she is alive and this could lead to her. Don’t you see mon cher, this is what I have been looking for. A way to find out who I am.”

“But what about Clackprattle, and, and Pook and the key and everything?” said Sir John.

“Mon cher, we have most of the key now, and there is Sabine and Emile and the others,” said Marie, “and… you. You won’t need me for the rest.”

“No of course not,” said Marie, “but you are right, it’s better for you to stay because of the situation. But for me, I have to go, I have to find if she is still alive.”

“Pff,” said Marie, “I am a French woman in France. What could be safer? I’ll be fine. I’ll just follow this lead and come back as soon as I can. You won’t even notice I’ve gone.”

Marie headed to their living area excitedly. She whistled a popular tune under her breath. Sir John watched as she started piling up clothes with wild abandon and little apparent discernment. She picked a suitcase and threw the clothes in, before sitting on it to close it.

“If you’re sure you don’t need me,” said Sir John again quietly.