The moose, boar, lion and tiger all stared down with a glassy gaze at Sir John and Marie. They in turn looked up at the stuffed animal heads as they sat in the large wood panelled room. They looked down to see a leopard skin on the floor. The far door opened and Lord du Bois came in with his dog Arthur, smiling broadly. 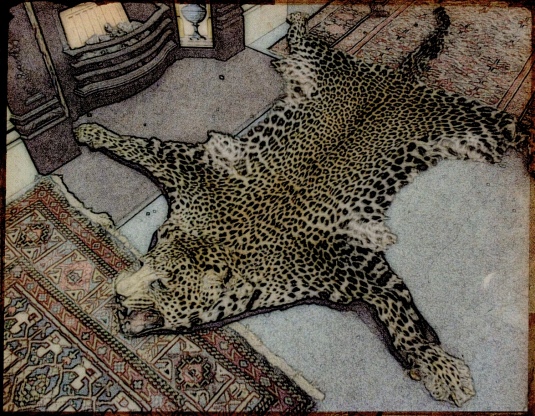 “You found my little abode then!” he said, indicating the roomy interior.

“Indeed,” said Sir John. “I take it you like hunting?”

“Oh dear, quite the reverse,” he said, “I inherited these frightful things when I took possession of the house. Since they’d lived here so long I felt unable to evict them. In any event, they seem to add a touch of authentic rustic atmosphere.”

“Lord du Bois,” said Sir John, ”whilst it’s pleasant to make your acquaintance again we have also come in something of a professional capacity.”

“Oh dear, this sounds deadly,” he said. “And I’ve just sent for the best brandy to warm us.”

“It’s nothing, I think,” said Sir John, “We just wanted to check if you had heard anything strange last full moon.”

“Yes a sound like this,” said Sir John and made the howling sound that Old Jim had told them he had heard. Instantly Arthur sat down, put his head back and made the same noise. Lord du Bois nearly fell off his chair laughing.

“Oh, my dear fellow,” said du Bois. “You’ve been talking to Old Jim, I wager. He’s told this story down the Old Lamb any number of times. Each time it gets more dramatic I swear. Yes, I know that noise; old Arthur here makes that when he’s lonely. Oh, I’m afraid he may have taken you down the wrong path.”

“Or off it completely,” said Sir John, looking crestfallen. At this point a maid entered with a decanter of brandy and three glasses. She carefully filled the glasses then left. Lord du Bois passed them round.

“Bottoms up!” he said and took a large gulp of the brandy.

“Mon Dieu!” said Marie taking a sip, “I ‘ave not had brandy this good since I was in France.”

“Yes, I’m afraid I’m a bit of a snob about it,” said Lord du Bois. “I only buy the best. It’s a devil to get it shipped here, but I lived too long in the city to give up all my creature comforts.”

“So you aren’t … a country gentlemen?” said Maire.

“Lord no!” said du Bois. “I’m a Bristol boy born and bred. Father made a packet from the shipping and I inherited it. I was rather bored of life by the docks so thought I’d try my arm in farming instead. It’s been the making of me.”

“Mrs Jennings,” said du Bois. “I can honestly say that since I’ve got here I’ve felt a new man.”

The trio sipped or gulped their brandy in silence whilst Sir John looked a little forlorn.

“Ah!” said du Bois suddenly, “I’ve just had a most marvelous idea. We can kill two birds with one stone here. You need to meet all the villagers to find out who knows what, and I’ve promised a certain someone in the Mallum house to hold a ball.”

“Well,” said du Bois. “If I keep my promise and throw a ball, you can get to meet everyone from the village, make some useful friends, maybe, and after a few drinks, who knows, you may even find something useful.”

“What a marvelous idea!” said Sir John and took a big gulp of brandy.