“This is hardly typical church material,” said Sir John looking at the inside of the holy building.

The walls were a deep azure and baize green. Complex, sinister murals adorned them at every angle, showing bizarre aquatic imagery. Here, a deep sea fish, its baleful eyes regarding the world with disdain. There, a many tentacled creature holding a collection of strange, unworldly objects. Above, on the ceiling, was a mosaic of stars, arranged in a form like no constellation man had seen. At its apex, a gibbous moon hung proud and sinister. The altar was similarly peculiar, draped with fish nets and lobster pots, buoys and rods. Behind the altar was a man, arms outstretched but on a boat, not a cross. Seahorses, lobsters, dolphins and jellyfish all leaped towards him. Above his head a triangle hung in space with one eye staring unblinking into the world. 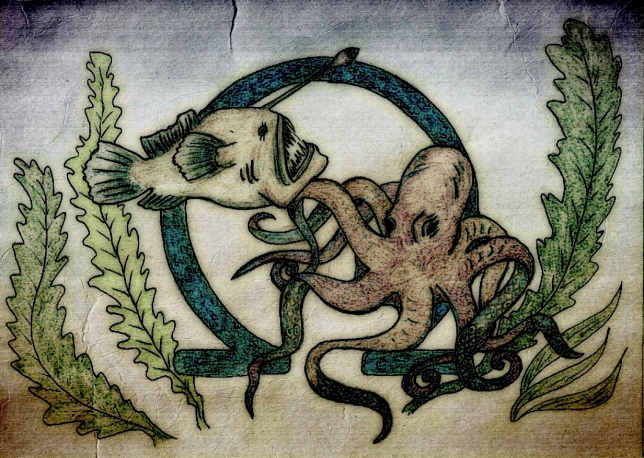 “Is this one of those modern churches?” said Lord Hollingbury. “The ones where they do a lot of singing and dancing?”

“To my eyes not at all,” said Marie, “but I feel no magic. Or, rather, no magic I recognise. There is … something … some strange feeling.”

“It’s probably a natural reaction to the colour scheme,” said Lord Hollingbury. “I have to concur, I see a whole lot of strange, even for me, but nothing I recognise.”

“Well, what is it all about?” said Sir John.

“Jesus!” came a loud voice from behind them. They turned round to see an older man, wild hair, disheveled beard and manic eyes walking towards them. He was dressed in black with a tired looking dog collar.

“He was a fisher … of men,” continued the vicar. “He would have understood. He would have seen these paintings and statues and known what they meant.”

The vicar had drawn up to the trio now.

“Not like a bunch of land-lubbers and city dwellers,” he finished and glared at them all.

“We were sorry to ‘ear about Mr Wombly,” said Marie. The vicar’s head snapped round to look at her.

“So the church is primarily for fisherfolk?” said Lord Hollingbury. “Hence the, er, remarkable decoration.”

“Our parish is the sea,” said Reverend Phillips. “Our flock is a shoal. We tend to the fisherfolk as our patron saint would want it.”

“What are you all here for anyway?” he asked. “This is a place of worship, not a holiday home.”

“You’re in this guide to the town,” said Sir John, showing the vicar. He snatched the guide away and read it quickly, his lips twitching as he did.

“Them new folk,” he said half to himself then handed the guide back to Sir John. “You don’t want to believe everything you read.”

“Unless it’s in the Bible,” said Lord Hollingbury cheerily. He was rewarded with a glare.

“You’ll have to excuse me,” he said pointing to the door, “but I have to prepare for a service.”

The trio took their cue to leave and the vicar watched until they had walked down the street before closing the door.

2 thoughts on “The Sunnyport Shadow: Chapter 4”