Sir John, Marie, and Lord Hollingbury sat in a snug in the Cock and Bull with a view overlooking the harbour and a small collection of fish themed horsebrasses. Lord Hollingbury was sipping his second double whisky, Marie had a glass from the only wine bottle in the pub, and Sir John had a pint of ale which was going cold. Marie’s wine glass was some distance away from her. When she had taken a sip of the wine she had said some words that Sir John didn’t know she knew. 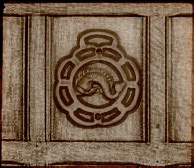 “So,” said Lord Hollingbury, “did anything seem out of the ordinary in that church.”

“I have to confess,” said Sir John, “that I have no idea what you regard as ordinary.”

“Yes, you have a point,” he said. “Well did anything seem out of ordinary to you then?”

“The decoration was bizarre, the vicar was deranged, and the atmosphere was oppressive. There were motifs that I’ve seen in no church before, even some of the more esoteric ones.” said Sir John.

“Strangely, we’re in agreement,” said Lord Hollingbury,” perhaps it’s the scotch. Mrs Jennings, as an etranger, what was your view of the strange place.”

“It is nothing like I have seen either, and there was something … some energy or some feeling I cannot describe,” said Marie.

“Do go on,” said Lord Hollingbury, “I suspect at the end of that marginally incoherent sentence is something rather interesting.”

“Sir John, with the greatest possible respect, I’m fairly certain that if Mrs Jennings were in any way offended she could make me drop my trousers and walk down the promenade singing loudly and get me to thank her afterwards.”

“That sounds like the sort of thing you’d do anyway,” said Sir John.

“Messieurs,” said Marie in exasperation, “let me think. There was something there. Something I haven’t felt before. Every creature is a little different you know, has a different … pattern or … feel to it. A … a gargoyle doesn’t feel like a pookah, say. But this … this was more different than anything. Like a different sort of mind.”

“Something different even from the paranormal creatures?” said Lord Hollingbury. “What might that be?”

“I can answer that,” said a man with unkempt white hair who suddenly sat down at their table. They all looked at him.

“What was the question?” he asked.

“Is everyone in this town some kind of lunatic?” said Sir John.

“I rather think they are,” said Lord Hollingbury. “It’s starting to endear the place to me.”

“I’m not mad,” said the man. “I can answer your question because I’ve lived here all my born days. So I can answer any question. I see you, all huddled up, you’ve seen something and you want to know more. Well I can help, see.”

“That’s very noble,” said Lord Hollingbury. “Is this desire to help driven by some inexplicable civic pride or is there some ulterior motive?”

“I’m sure the gentleman is just keen to assist,” said Sir John irritably. “Not everyone has a hidden agenda.”

“Indeed, I don’t have a hidden agenda,” said the man and pushed an empty whisky glass in front of him.

A bottle of whisky was procured for the table, glasses filled and the man began his tale.

“See, like I say, I been here all my life. My name’s William Joseph, and I tend to the lighthouse. My father did the job before me and my grandfather before him. So this place is in my blood, And good blood it is, too. You know this place had a reputation for long life. Well that were true. My grandfather was 130 when he died and was fit as an ox to the last day. And do you know why?”

“He was an inveterate liar?” said Lord Hollingbury. The lighthouse keeper looked shocked when a hand landed on his shoulder.

“Come on Bill, time to stop getting drinks from the visitors in exchange for tall stories.”

The pub landlord beamed down at the quartet and looked at Bill Joseph.

“There’s a game of cribbage going in the corner, why don’t you go and join that instead.”

Bill Joseph got up grumbling and wandered over to the where the landlord pointed.

“Sorry about that,” said the landlord. “Nice chap but a bit do-lally.”

“Well, we seem to be running short of leads here,” said Lord Hollingbury, who then looked at the bottle of scotch he had bought. “As well as drinks.”

“Actually,” said Sir John, “I think I have an idea. Marie, we need to send a telegram home.”

2 thoughts on “The Sunnyport Shadow: Chapter 5”