Marie looked around at the church and its bizarre decoration again. Without the shock of the first viewing and the distraction of Lord Hollingbury she was able to see the artwork more clearly. In particular she noticed the background. For behind the fish, crustaceans and fantastical sea creatures there was a constant pattern of pale yellow disks set in a blue base. 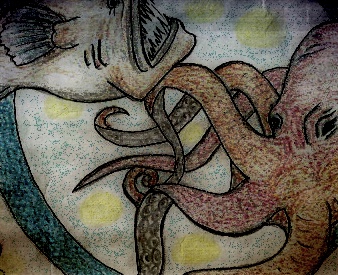 She looked at some of the paintings as well. They were mostly biblical scenes, almost all with a watery theme. But some of the scenes she didn’t recognise. She knew the story of Jesus walking on water, but when did the disciples, or anyone, go bathing? Why was there a painting of an old man walking out of the sea? Why was there a …

Suddenly the entrance opened up and Marie swung round. Reverend Phillips had entered the church. He came in and shut the doors behind him then walked up the aisle.

“Hello,” said Marie. The vicar stopped with a start and looked at her.

“It is Marie Jennings,” said Marie. “I was here the other day.”

The vicar looked at her and nodded.

“I remember you now. Came with that man. The strange one. And the idiot.”

“I wanted to talk to you about the men that have returned,” said Marie.

“The Lord moves in mysterious ways,” said the vicar.

“But,” said Marie, “they must have been dead. That’s very mysterious indeed, is it not? When we spoke the other day, you mentioned the resurrection. And now a man is alive who should be dead.”

“The sea is a fickle mistress,” said the vicar. “She sometimes gives and she sometimes takes.”

“She?” said Marie. “You make her sound like a person.”

“All the time I’ve lived here I’ve never once thought of her as anything different,” said the vicar. “For the sake of your health and sanity, you’d better do the same.”

“What makes her a person?” said Marie. “What does she take exactly?”

“If you’d tended to those I’ve tended to, you’d know well enough. She gives life and she takes it. She sustains us here with her bounty, but it comes at a price. Every year I have services for them that don’t return. Them I can’t bury as there’s no body to bury. So yes, I see her as a fickle mistress and one that takes in a heartbeat.”

“And when she returns them?” said Marie.

“I have to prepare a sermon,” said the vicar. “I have a service this evening. You’ll have to excuse me.”

With that, the vicar headed to the vestry. Just before he arrived there he stopped and turned to look back at Marie.

“Them with eyes can see,” he said and shut the door behind him.

2 thoughts on “The Sunnyport Shadow: Chapter 12”