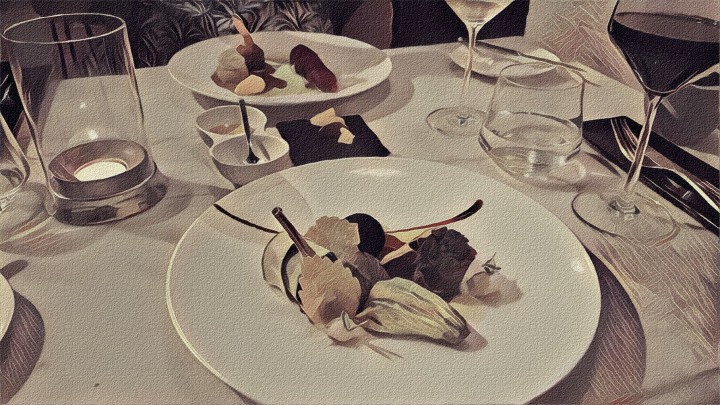 At the Artists’ Church, the Jennings and their retinue sat around a large table. It was covered with the remains of exquisite food, procured by Sabine from “an acceptable restaurant” called Vefour. Fine though the meal was, the mood around the table was a little subdued. Marie and Sir John had just finished explaining the events at the Oisienne’s lair.

“So it is like your good news, bad news, yes?” said Emile, idly toying with a petit fours.

“But bad that we don’t why Pook has some… special powers?” said Emile.

“One time before, in Manchester, his powers had been increased by this artifact of Mesmer.” she said. “He had Clackprattle like a puppet on a string, and mesmerised a group in a room. But these were people, not magical creatures like the Oisienne or…”

“You,” said Emile, still staring at the tiny cake.

“Yes,” said Marie. “Me. And in any event, that artefact was destroyed.”

“Definitely?” said Emile, “Maybe it could still be…”

“I ground it under my heel,” said Marie and Emile winced. “I was rather annoyed at the time.”

“So, a mystery,” said Sir John, “but one with a precedent. Maybe Mr Mesmer had other toys that we don’t know about.”

“True enough,” said Emile. “What about the part of the key? Have we found anything?”

He looked to end of the table where Phlebotomous and Osvold were bent over the little box that Marie had been given. They had opened it and been deep in conversation for a while. Phlebotomous had barely touched the glass of milk in front of him.

“It seems to be…” said Phlebotomous, “hmm… probably best described as a metallic filament of unknown metallurgic composition and around three inches long.”

“Can we use this bit of wire to find the next piece,” the maid said.

“That’s more good news, bad news,” said Sir John. “Technically we need the map, but if the notes that Dinard left are enough…”

Sir John glanced at Osvold, who then starting whispering in Phlebotmous’ ear. The two conversed back and forth in whispers for nearly five minutes.

“Probably not,” said Phlebotomous and paused.

“Is there a little more?” asked Emile.

“The notes identify around thirty highly probable places,” said Phlebotmous, “and around a hundred likely places.”

“Oh,” said Sir John and sank back in his seat.

“We could ask the Oracle,” said Sabine looking at her nails.

“The Oracle of Paris?” said Sabine. “She would likely know.”

“You keep saying that,” said Sabine. “It makes you sound foolish.”

“Well, I feel a little foolish!” said Emile. “The Oracle of Paris, what is this? What other secrets do you have?”

“She is a… special creature, that does what all oracles do and help one see the future and perhaps find things. Although, like all their kind, she is a little opaque and capricious,” said Sabine.

“And I am a woman in Paris and have exactly as many secrets as I like.”

Emile leaned toward her.

“Why now, woman?” he said. “We have spent so much time looking for these bizarre things and only now…”

“Only now we have this key thing,” said Sabine, “so we have something to show her. Do you think we could just turn up and say oh, ‘we are looking for something and we don’t know what it is… where can we find it?’ Have you ever spoken to an oracle? The answer would be more vexing than the question. No, now, we have something concrete and we can get… a better answer.”

Emile threw up his hands and stood up.

“Sabine, can you tell us where this oracle is?” said Marie.

Marie sat back and felt a little nudge at her shoe. She looked down and saw a small stone.